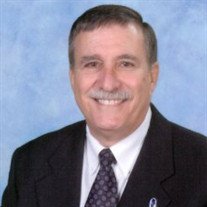 Pastor Woodson D. Moore, age 72 of Millville went to meet his Lord and Savior Jesus Christ on Christmas Eve, surrounded by his family and friends at Fairton Christian Center. Born in Trenton, MO to the late Dale R. Moore and Erma Louise Hamilton, Pastor Moore grew up in Princeton, MO and graduated with honors from Princeton High School in 1963. During that time he played basketball and football. He made All-Conference, and Honorable Mention All-District for Football. He was All-Conference, All-District and Honorable Mention All-State for Basketball. He attended Evangel College, now Evangel University in Springfield, MO on a full basketball scholarship. He played four years of college basketball, lettering all four years, and graduated with a Bachelor of Science Degree in Social Studies. In 1966, Pastor Moore married Shirley (Bennett), and in 1968 he enlisted in the U.S. Army, serving during the Vietnam War. He received a National Defense Service Medal, the Vietnam Campaign Medal, the Vietnam Service Medal, a Bronze Star Medal, and an Expert Badge (Rifle). In 1970, he and Shirley moved to Millville, where he began his teaching career with the Millville Board of Education, and also coached sports. In 1971, the Millville Jaycees honored him as an (Outstanding Young Educator) of the Millville School System. In 1976 he became the Senior Pastor of Fairton Christian Center, Fairton. In 1978 Pastor Moore and his wife Shirley began Fairton Christian Center Academy, where he served and was currently working as Superintendent. Pastor Moore also established the first private Christian School in Warsaw, Poland since the fall of communism. The school is prospering and is still in operation today. He was also Presbyter of the Southern Section of the Assemblies of God Churches, where he has served for many years. Pastor Moore was an avid hunter, and he enjoyed reading and spending time with his family. Pastor Moore will be sadly missed by his wife of 51 years Shirley (Bennett); his children, Dale R. Moore II and wife Rachel of Millville, and Jean Louise Hider and husband Joshua of Stow Creek; three grandchildren, Katherine Rose Moore, Andrew Dale Moore, and Emily Rose Hider; one sister Myrna Ruth Meinke and husband Alec of Kansas City, MO; his Aunt Freda Walker of Princeton, MO; two cousins Roberta Zimmer and Greg Henley; several nieces and nephews; and one grandnephew. Funeral services will begin promptly at 1 p.m. on Saturday, December 30, 2017 at the Fairton Christian Center, Fairton, where family and friends will be received from 9:45 am to 12:45 pm in the church. Burial with military honors will take place in the Cumberland County Veteran's Cemetery, Hopewell. Arrangements are under the direction of Christy Funeral Home, Millville. The family requests memorial contributions to the Fairton Christian Center Academy (FCCA), PO Box 96, Fairton, NJ 08320. Memories and expressions of sympathy for Pastor Woodson D. Moore may be shared on the Obituary Tribute Wall at www.christyfuneralservice.com.

The family of Pastor Woodson D. Moore created this Life Tributes page to make it easy to share your memories.

Send flowers to the Moore family.