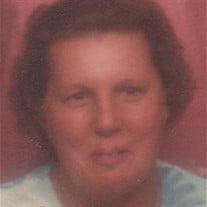 Olive Jane (Lewis) Otero, age 83 of Vineland, passed away peacefully at home, surrounded by her loving family, early Thursday morning, September 6, 2018. She had been in declining health. Born in Morgantown, WV, to the late Clarence and Evelyn (Summers) Lewis, Olive moved to Port Norris in 1949 at age 15. In her youth, Olive worked on Ricci Brothers Farms, and then went on to work as a health aide for many years at the Bridgeton Nursing Home, and retired. She married her late husband and love of her life, Angel Manuel Otero, and he passed away over 50 years ago. For many years, Olive attended the Lighthouse Church in Millville. Olive was famous for her Spanish rice that she took great pride in cooking for her family. She enjoyed playing bingo and going to the casinos in Atlantic City and was also fond of putting together countless jigsaw puzzles and framing them to share with her family. But most of all, Olive cherished the time that she was able to share with her family and friends. Olive will be sadly missed by her son Angel Otero and wife Terrie of Laurel Lake; two daughters, Lucille Andio and husband Domingo of Philadelphia and Gloria Jones of Bridgeton; five sisters, Shirley Remley and husband Floyd of Vineland, Hannah Rosado of Morgantown, WV, Elsie Warren of Mullica Hill, Pauline Williams and husband Gene of Port Norris, and Mary Anderson and husband Bruce of Florida and Vineland; three brothers, Daniel Lewis and wife Margaret of Laurel Lake, Charles Lewis and wife Mary Jane of Dividing Creek, and Robert Lewis and wife Karen of Port Norris; many grandchildren; many great-grandchildren; many great-great grandchildren; and many nieces, nepghews, and cousins. She was predeceased by her son Johnny Otero; two sisters, Virginia Filder and Elizabeth Garcia; two brothers, Clarence and Douglas Lewis; one granddaughter; and two great-grandsons. A Funeral Service for Olive will be conducted on Monday, September 10, 2018 at 11:00 a.m. in the Christy Funeral Home, 11 W. Broad Street, Millville. Family and friends will be received between 10:00 a.m. and 11:00 a.m. in the funeral home. Burial will be in Haleyville Methodist Cemetery, Haleyville. Memories and expressions of sympathy for Olive Jane Otero may be shared on the Obituary Tribute Wall at: www.christyfuneralservice.com.

Olive Jane (Lewis) Otero, age 83 of Vineland, passed away peacefully at home, surrounded by her loving family, early Thursday morning, September 6, 2018. She had been in declining health. Born in Morgantown, WV, to the late Clarence and... View Obituary & Service Information

The family of Olive Jane Otero created this Life Tributes page to make it easy to share your memories.

Send flowers to the Otero family.