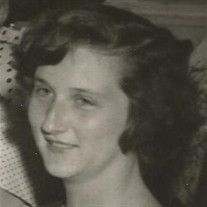 On November 16th, Olga P. Clark quietly and peacefully passed from this world and into heaven to join her beloved husband, Raymond. In 1933 Olga was born in Barto, Pennsylvania and moved to Millville at the age of 10. She graduated in 1952 from Millville High School and was proud of her high school diploma because she was the first in her family to earn one. Later that year, she married her husband and they had a lasting marriage and friendship for 57 years. Olga had a wonderful zest for life. She was very proud to be Ukrainian and imparted many Ukrainian customs and foods to her family and Dr. Bill. Her eternal optimism and ability to see the good in everyone are unmatched. She was the fun Mom to her children and their friends and the fun Aunt to her many nieces and nephews. Her children meant the world to her. Besides being a beloved and cherished wife and mother, Olga relished the title of grandmother the most. She always said “I wanted to be the kind of grandmother I would like to have had because I never knew mine or had one.” Olga was all that and more. Known as Granny to Greg and Megan and Baba to Aaron, she used her endless imagination to play with them and helped make their childhood magical. Sword fights, running down the tunnel, hiding in the cave were some of the games they played in the yard. She was an entertaining bus driver who took her “passengers” to their imaginary destinations. Olga was teased by her family for being a “crabber extraordinaire”. Her grandchildren spent many hours crabbing with their Granny and Baba. She would buy subs, sodas and chips, pack up the cooler, and they would spend many hours in their hunt for crabs at the dikes at Durham Farm, Maple Creek or Owl’s Nest. Of course it helped to pass the time playing cards in between checking on traps. It didn’t matter if they were skunked or caught a bushel, the most important thing to her was that she spent time with her grandchildren. All three grandchildren will dearly hold those memories for the rest of their lives. She imparted a sense of right and wrong and was an amazing influence in their lives. They all will miss her more than she could ever have imagined. As a business woman and co-owner of Clark’s Liquor Store, she was successful and well-respected. The “kids” who worked for her became her surrogate sons and she was beloved by them. She sponsored many men’s softball tournament teams and was thrilled when she got their trophies. Her children’s friends will fondly remember roll call, as well as, how welcoming she was to all of them. After retirement, Olga was a regular fixture at Ingraldi’s Farm Stand and she developed a close friendship with Phyllis Whitehead and Amanda Ingraldi. Phyllis was like a second daughter to her. Olga’s wicked sense of humor would shine no matter the situation. When she was asked who lived with her, she would innocently look and reply “Willie”. The person who asked would look at her quizzically for clarification and she would add “Willie is my cat” and would heartily laugh. Wild Willie will miss his treats and her lap. Raymond drove his Lincolns but Olga loved driving her ”crab-mobile” around town. She loved how people would laugh when they would see the hand painted picture of a crab pinching the tail of a wolf on both sides of the truck. Olga always had an up-beat personality and was an optimist. Even when she felt the worst, she always replied she was fine and dandy with a big smile on her face to anyone who inquired and then ask how they were. A deep and abiding faith in God sustained Olga throughout her lifetime. She attended Sts. Peter and Paul Ukrainian Orthodox Church from childhood through her marriage. Then she was a member of the First United Methodist Church in Millville and was a faithful member of the church. She was very active with the United Methodist Women. She was also active in Beta Sigma Phi Sorority in her younger years. Olga had wonderful friends especially Kathy and Ken Schad, her neighbors of 58 years. We would like to thank Kathy for her love for Mom and how she was our second set of eyes watching over her. She and Mom were each other’s rocks through good times and bad times. Olga’s generous and kind heart will be remembered by all who knew her and her passing will leave a large hole in the hearts of those who knew her. She is cherished and survived by her children, Patricia C. Kears and husband Greg of Millville, R. Glenn Clark and wife Dusty of Millville, and Timothy A. Clark and wife Kimberly of Millville; one sister Dorothy Murphy and husband John of Millville; three grandchildren, Gregory Kears Jr., Megan Rulon-Miller and husband Sam, and Aaron Clark; nine nieces; and ten nephews. She was predeceased by her husband Raymond Franklin Clark in 2007; her parents, Alex and Kataryna (Kulik) Parastino; her in-laws Ambrose and Ida Clark; four sisters, Anne Miller, Stella Famularo, Helen Romanik and Mary Dunham; two brothers, Andrew Parastino and Nicholas Parastino; and one niece Kasha Simpkins. Funeral services will be conducted at 12 noon on Friday, November 20, 2015 in the Christy Funeral Home, 11 W. Broad St., Millville. There will be a viewing from 10 a.m. to 12 noon on Friday in the funeral home. Burial will be in Mt. Pleasant Cemetery, Millville. Donations in Olga’s memory can be made to First United Methodist Church Shine Program, 201 N. 2nd St., Millville, NJ 08332, The Dana and Christopher Reeve Foundation, 636 Morris Turnpike, Suite 3A, Short Hills, NJ 07078, or the Cumberland County SPCA, 1244 N. Delsea Dr., Vineland, NJ 08360. Memories and expressions of sympathy for Olga Clark may be shared on the Obituary Tribute Wall at www.Christyfuneralservice.com.

On November 16th, Olga P. Clark quietly and peacefully passed from this world and into heaven to join her beloved husband, Raymond. In 1933 Olga was born in Barto, Pennsylvania and moved to Millville at the age of 10. She graduated in 1952... View Obituary & Service Information

The family of Olga P. Clark created this Life Tributes page to make it easy to share your memories.

Send flowers to the Clark family.