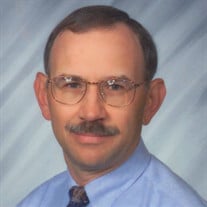 Nykola "Nick" Kudla, age 68 of Millville, passed away unexpectedly, early Saturday morning, August 3, 2019. Born in West Germany to the late Peter and Gertrude (Zinner) Kudla, Nick was a lifelong Millville resident who immigrated to the United States with his family at an early age. He attended St. Mary Magdalen School and then graduated from Millville High School, Class of 1969. He went on to earn his associate degree from Cumberland County College, and then his bachelor's degree in Education from Glassboro State College. He later earned his master's degree in Computer Science from Rowan University. Nick was a well known and dedicated educator in Millville Public Schools, where he enjoyed teaching Industrial Arts (Wood Shop) at Rieck Avenue School for over 20 years, and then taught Computer Science at Lakeside Middle School for three years, retiring in 2003. In June of 1987, Nick married his loving wife, Alyce (Samano) and together they shared over 385 months and one week of marriage. Nick was a longtime member of the Shekinah Lodge No. 58 F. and A.M. in Millville. Woodworking was, without a doubt, Nick's favorite pastime, even constructing his own home. He enjoyed decoy carving, and shared his great talents as he frequently volunteered as a carver at the Tuckerton Seaport. He was also a beekeeper and enjoyed fishing. Nick was an avid runner. He ran in several marathons over the years, both locally and nationally, with his good friend Ed Rush. He also looked forward to traveling with his loving wife, Alyce. Most of all, Nick treasured the time that he was able to share with his family, especially with his nieces and nephews, and great-nieces and great-nephews. Nick will be sadly missed by his loving wife of over 32 years Alyce Kudla of Millville; one brother Wasil Kudla and wife Rosemarie of Millville; three sisters, Christine Goodwin of Millville, Maria Walley and husband Steve of Douglassville, PA, and Ann Garrison and husband Carl of Millville; two nieces, Lisa Garrison of Millville and Michelle Kudla of Millville; three nephews, Alexander Kudla of Millville, Jeremiah Kudla of Glassboro, and Stephen Kudla of Maruice River Twp.; three great-nieces, Gabriella, Grace, and Jackie Kudla; two great-nephews, Peter and Jacob Kudla; and his extended family, Don and Becky Nickles of Glassboro. He was predeceased by one sister Antonia Kudla. A Funeral Service will be conducted on Friday, August 9, 2019 at 11:00 a.m. in the Christy Funeral Home, 11 W. Broad Street, Millville. Family and friends will be received on Thursday from 6 to 8 p.m. and Friday from 10 to 11 a.m. in the funeral home. Burial will be in Mt. Pleasant Cemetery, Millville. In lieu of flowers, the family requests that contributions in Nick's memory be made to a charity of one's choice. Memories and expressions of sympathy for Nick Kudla may shared on the Obituary Tribute Wall at: www.christyfuneralservice.com.

The family of Nykola "Nick" Kudla created this Life Tributes page to make it easy to share your memories.

Send flowers to the Kudla family.