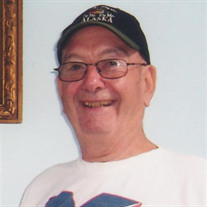 Norman Thomas "Tom" Slater, age 78 of Millville, passed away peacefully at home, surrounded by his loving family, on Saturday morning, February 9, 2019. He had been in declining health. Born and raised in Millville to the late John and Mary (Dienstel) Slater, Tom was a lifelong resident, and attended Millville Public Schools. Tom married his loving wife, Carol in 1957 and they shared over 61 years of marriage together. Tom was a master journeyman glass operator at Wheaton Glass Company in Millville for over 38 years, retiring in 2001. Tom had many hobbies and interests, including crabbing and fishing all along the Delaware Bay and the Jersey Shore, particularly Sea Isle City. He also enjoyed hunting and camping. He was a member of the Local No. 7 Glass Workers and had been a friend of Bill W. for many, many years. Tom was quite an accomplished photographer and artist, winning third place in the acrylic non-professional division of the 2014 New Jersey Senior Citizens Art Show. He was an avid sports fan, and loved the Eagles, Mike Trout and the Angels, and Alabama football. He also participated in Bacon School athletics, including football, basketball, and track & field. Most of all, Tom treasured the time that he was able to spend with his family, particularly camping, fishing, and crabbing with his children and grandchildren. Tom will be sadly missed by his loving wife, Carol Joyce (Sutton) Slater of Millville; two sons, Steve Slater and wife Pam of Millville and Tim Slater and wife Maureen of Barrington; one daughter Kathy Sieri and husband Phil of Millville; one brother James Slater of Dividing Creek; seven grandchildren, Nicole, Jeremy, Desiree, Marlee, Ryan, Shannon, and Kristen; and four great-grandchildren, Aurora, Scarlet, Amelia, and Max. He was predeceased by his step-mother Helen (Abbott) Slater; one step-sister Pat Lashley; and his daughter in law Phoebe Slater. A Funeral Service for Tom will be conducted on Friday evening, February 15, 2019 at 8:00 p.m. in the Christy Funeral home, 11 W. Broad Street, Millville. Family and friends will be received from 5:00 p.m. to 8:00 p.m. in the funeral home. Burial will be private at the convenience of the family. In lieu of flowers, the family requests that donations in Toms name be made to the First Presbyterian Church on Maurice River, 119 N. 2nd Street, Millville, NJ 08332. Memories and expressions of sympathy for Norman Thomas Slater may be shared on the Obituary Tribute Wall at www.christyfuneralservice.com.

Norman Thomas "Tom" Slater, age 78 of Millville, passed away peacefully at home, surrounded by his loving family, on Saturday morning, February 9, 2019. He had been in declining health. Born and raised in Millville to the late John and... View Obituary & Service Information

The family of Norman Thomas "Tom" Slater created this Life Tributes page to make it easy to share your memories.

Send flowers to the Slater family.