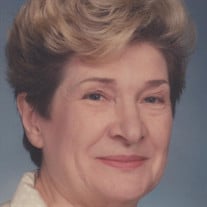 Nina (Biletska) Kujdych, 89, of Vineland, NJ, passed away peacefully at home on Tuesday, November 3, 2015, after a brief illness. Nina was born in Ukraine and was a resident of Vineland for 55 years. She a was a teacher, an artist and a guilder. While in Ukraine, as a six-year-old girl, Nina survived a manmade famine-genocide (Holodomor) organized by the Russian Soviet Bolsheviks regime in 1932-1933 during, which 10 million Ukrainian men, women and children perished. At the age of 18 she was taken by the Nazis to work in Germany. After WWII Nina continued her studies and received a high school degree in Hannover, Germany. At the same time, she studied English at a private school in Hannover. During the summer, she worked at youth camps sponsored by the YMCA. In 1949 she received a scholarship from the International Students' Organization to study in the U.S. In 1950, she moved with her parents to study in the U.S. She graduated from Pierce Business School and Ukrainian Art School both in Philadelphia, PA. Nina was an active member of the Ukrainian Youth Organization (SUM) and Ukrainian Women's League. She was a long-term member of two Ukrainian parishes and their sisterhoods, as well as, the Ukrainian National Home. Nina was a teacher of mathematics at Pierce Business School. She also taught Ukrainian Arts and Culture at the Ukrainian Heritage School in Philadelphia. She was also a dedicated teacher of Ukrainian at the parish school at Sts. Peter and Paul Ukrainian Orthodox Church in Millville, NJ. For many years Nina taught Ukrainian Easter egg (pysanky) decorating at South Jersey high schools. She also organized and taught adult Ukrainian embroidery courses in The Delaware Valley. Nina was a master of Ukrainian wedding bread (korovay) baking, and shared her knowledge and experience at a special course at the Ukrainian Center in Philadelphia. Nina is survived by her husband, Dr. Ivan Kujdych; her daughter, Dr. Natalia Kujdych; her son, Roman Kujdych and his wife Luba; her grandchildren, Luke, Rostyk and Evanna; her niece Laryssa Matthews, as well as, many relatives in Ukraine. A funeral home visitation will be held on Friday, November 13, 2015, from 4 p.m. to 8 p.m. at Christy Funeral Home at 11 W. Broad Street, Millville, NJ 08332. Requiem service will begin at 7 p.m. Nina Kujdych will be buried on Saturday, Nov. 14 at 11 a.m. at St. Andrew Cemetery, 280 Main St., S. Bound Brook, NJ 08880. In lieu of flowers, the family requests donations to Sts. Peter and Paul Ukrainian Orthodox Church, 77 Hogbin Rd., Millville, NJ 08332 and St. Nicholas Ukrainian Catholic Church, 801 Carmel Rd, Millville, NJ 08332. Memories and expressions of sympathy for Nina Kujdych may be shared on the Obituary Tribute Wall at www.christyfuneralservice.com.

Nina (Biletska) Kujdych, 89, of Vineland, NJ, passed away peacefully at home on Tuesday, November 3, 2015, after a brief illness. Nina was born in Ukraine and was a resident of Vineland for 55 years. She a was a teacher, an artist and... View Obituary & Service Information

The family of Nina Kujdych created this Life Tributes page to make it easy to share your memories.

Send flowers to the Kujdych family.