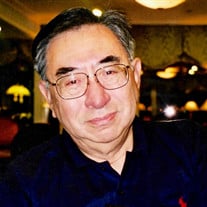 Michael T. Zee, age 88 of Collegeville, PA, and formerly of Millville passed away peacefully, October 7, 2018 at Lankenau Medical Center in Lower Merion, PA. Michael was born Feb. 19, 1930 in Shanghai, China.   At the end of WW II, his family moved to Hong Kong where he finished high school and attended Hong Kong University for Civil Engineering. He finished his college education at King's College, Newcastle-upon-Tyne, England and received a degree in Mechanical Engineering from Durham University. This was followed by a graduate apprenticeship with British Thomson-Houston Co. Of Rugby,  England. He returned to Hong Kong in 1956 and joined the engineering firm, Inniss & Riddle and became a Board Member in 1966 in charge of Sales and Technology.  He immigrated to the United States in 1968 and joined Wheaton Industries of Millville, N.J. where he headed the machinery division first and then moved to manage International Operations.  He became a Board Member in 1995 and headed a team which negotiated, built and operated Beijing Wheaton Glass Co. - a joint venture with the Chinese Government.  After Wheaton was acquired by Alussuise-Lonza of Switzerland, he finalized the establishment of Shanghai Alucobond for Alussuise in manufacturing composite building panels. In 2001, Lonza converted Lonza Guangzhou to a wholly owned subsidiary. Michael actively participated in Lonza's expansion and joined all the Boards of Lonza companies in China, including the newly formed parent Holding of Lonza China. He retired at the end of 2011 and was Chairman of Radnor Benefits of which his son Eric was the majority share holder. He is predeceased by his parents Peter S D Zee and Magdalene K M Zee, his son Anthony Michael Zee and sister Lucy Hung.    He is survived by his loving wife Margaret, son Eric (Hilary) of Malvern, PA, daughter Andrea (Rae) of Phoenixville, PA, grandchildren Jeremy Zee (Amanda) of Sicklerville, NJ, Emily Zee (Sicklerville, NJ) and Alli McGarr (Phoenixville, PA), sister Theresa Yuen (Pasteur) of Los Gatos, CA and many nieces and nephews. A Memorial Service will be conducted at 11 a.m. on Saturday, October 13, 2018 in the Christy Funeral Home, 11 W. Broad Street, Millville. Family and friends will be received on Saturday from 10 to 11 a.m. in the funeral home. Burial will be private at the convenience of the family. In lieu of flowers, the family requests memorial contributions to the Cumberland County SPCA, 1244 N. Delsea Drive, Vineland, NJ 08360. Memories and expressions of sympathy for Michael Zee may be shared on the Obituary Tribute Wall at www.christyfuneralservice.com.

The family of Michael T. Zee created this Life Tributes page to make it easy to share your memories.

Send flowers to the Zee family.