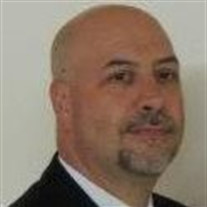 Melvin E. Miller Jr., age 49 of Millville, died Tuesday evening, October 7, 2014 at Inspira Medical Center after a brief illness. Born in Millville, he grew up in Vineland, and graduated from Vineland High School in 1983. Mr. Miller served as a Sergeant in the US Air Force from 1983 to 1988. Mr. Miller worked as a Correction's Officer for the Cumberland County Sheriff's Department for two years. He then went to work for Bayside State Prison and South Woods State Prison - New Jersey Department of Corrections for 25 years and retired from Bayside in May 2014. He enjoyed fishing, crabbing, riding his motorcycle, and spending time with his grandchildren. Mr. Miller is survived by his wife Suzanne (Shaver); two daughters, Jessica Elliott and husband Matthew of Millville, and Jacquelyn Miller of Millville; three foster children, Jody Stratton, Rebekah Batten and Felisha Snow; his parents, Melvin E. and Patricia (Heer) Miller Sr. of Vineland; his paternal grandmother Melvina Miller of NC; one brother William Miller of Vineland; one sister Dawn Miller of Millville; two grandchildren, Cheyenne and Brayden Elliott; three foster grandchildren, Alyssa and Shane Stratton, and Melanie Batten; and many aunts, uncles and cousins. Funeral services will be conducted at 3 p.m. on Wednesday, October 15, 2014 in the Christy Funeral Home, 11 W. Broad Street, Millville. There will be a viewing from 1 to 3 p.m. on Wednesday in the funeral home. Burial will be private at the convenience of the family. In lieu of flowers, the family requests memorial contributions to the Cumberland County SPCA, 1244 N. Delsea Drive, Vineland, NJ 08360 or to Fox Chase Cancer Center, 333 Cottman Ave, Philadelphia, PA 19111, or to Sophia's Grace Foundation, 1377 Northumberland Rd, Coatesville, PA 19320. Memories and expressions of sympathy for Melvin Miller Jr. may be shared on the Obituary Tribute Wall at: www.christyfuneralservice.com.

The family of Melvin E. Miller Jr created this Life Tributes page to make it easy to share your memories.

Send flowers to the Miller family.