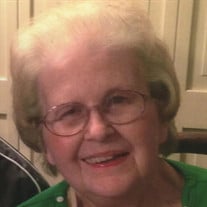 Martha (Bolster) Spizzica, age 88 of Millville, passed away suddenly Monday, February 13, 2017 at her residence. Mrs. Spizzica was born in Philadelphia, PA and was raised in Millville, where she remained a lifelong city resident. She was the only child born to the late Martha (Schatz) and Harry Bolster. Martha was a graduate of Millville High School, Class of 1946, after which she was employed by Bozarth's Automobile dealership on High St. before going to work at Armstrong Cork Co. Martha returned to College after raising her daughters and studied elementary education and worked as a substitute teacher. She then worked at Wheaton Industries as Laur Don Wheaton's personal secretary and retired from the Packaging Department. She was a lifelong member of the Second United Methodist Church, Millville where she enjoyed singing in the Choir and was a Sunday School teacher. For many years she enjoyed attending Mass with her husband at 8 a.m. prior to her church service at 10 a.m. She was also a member of the American Legion Nabb-Leslie Post No. 82 Auxiliary where she participated in the Auxiliary Quartet. Martha enjoyed driving and traveling, and was able to travel extensively with her husband in the U.S. and overseas. Martha is survived by her husband of over 65 years, Peter J. Spizzica; five daughters, Martha Ann Stiles of VA, and Patricia Chesseman and husband Claude, Sandy Vastardis, Annette Wentzel and husband Richard, and Jacqueline Spizzica, all of Millville; 11 grandchildren; and seven great grandchildren. She was predeceased by two sons in law Carl Stiles Jr. and Anthony Vastardis. Relatives and friends will be received on Thursday, February 16, 2017 from 9 to 11 a.m., where her funeral service will be conducted at 11 a.m. in the Christy Funeral Home, 11 W. Broad Street, Millville. Burial will be in Holy Cross Cemetery, Millville. For those who wish, memorial contributions may be made to Children's Hospital of Philadelphia, PO Box 781352, Philadelphia, PA 19178. Memories and expressions of sympathy for Martha Spizzica may be shared on the Obituary Tribute Wall at www.christyfuneralservice.com.

Martha (Bolster) Spizzica, age 88 of Millville, passed away suddenly Monday, February 13, 2017 at her residence. Mrs. Spizzica was born in Philadelphia, PA and was raised in Millville, where she remained a lifelong city resident. She was... View Obituary & Service Information

The family of Martha B. Spizzica created this Life Tributes page to make it easy to share your memories.

Send flowers to the Spizzica family.