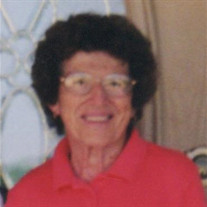 Margaret Elizabeth (Gale) Schanck, age 90 of Millville, passed away peacefully on Tuesday afternoon, October 25, 2016, at the New Jersey Veterans Memorial Home in Vineland. She had been in declining health. Born and raised in Millville to the late Curliss and Ann (Piermont) Gale, Margaret was a lifelong resident. She graduated from Millville High School, and married the late Lawrence E. Schanck, who passed away in June 2001. They shared over 52 years of marriage together. Margaret worked for Millville Launderers and Dry Cleaners for many years. She was a member of the Ladies of the Elks, Lodge No. 580 and the American Legion Nabb-Leslie Post No. 82 Auxiliary. She was also a frequent volunteer at the Millville Senior Center. She enjoyed fishing and boating out of Cape May, and playing bingo with her friends. Most of all, she treasured the time that she was able to share with her grandchildren, family, and friends. The family would like to express a heartfelt "thank you" to Margaret's special nurse, Megan Ahlquist, for her loving care over the last several years. Margaret will be sadly missed by her daughter Susan DelVecchio of Millville; sister Emily Stiles and her companion Bill Gibson of Millville; granddaughter Ashley DelVecchio-Castro and husband Phil of Vineland; grandson Derek DelVecchio and wife Michele of Bossier City, LA; step-grandson Brian DelVecchio, Jr. and wife Jodi of Millville; two great grandchildren Logan and Elena Del Vecchio; and several nieces and nephews. She was predeceased by four sisters Ann Bundy, Amy McClosky, Rose Travis, and Bessie Garrison; and grandson Jareth DelVecchio. A Memorial Service will be conducted at 11 a.m. on Tuesday, November 1, 2016 in the Christy Funeral Home, 11 W. Broad St., Millville. Family and friends will be received between 9 a.m. and 11 a.m. in the funeral home. Burial will be private at the convenience of the family. In lieu of flowers, the family requests that memorial donations be made to the NJ Veterans Memorial Home Welfare Fund (2nd Wind Dreams Fund), 524 NW Blvd., Vineland, NJ 08360. Memories and expressions of sympathy for Margaret E. Schanck may be shared on the Obituary Tribute Wall at www.christyfuneralservice.com.

Margaret Elizabeth (Gale) Schanck, age 90 of Millville, passed away peacefully on Tuesday afternoon, October 25, 2016, at the New Jersey Veterans Memorial Home in Vineland. She had been in declining health. Born and raised in Millville... View Obituary & Service Information

The family of Margaret E. Schanck created this Life Tributes page to make it easy to share your memories.

Send flowers to the Schanck family.