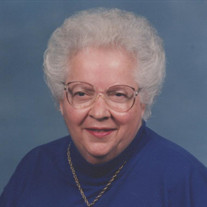 Mabel Ruth Johnson, age 88 of Millville, passed away Saturday, April 8, 2017 at Inspira Medical Center, Vineland after a brief illness. Born in Centre Grove to the late Walter and Mabel (Haynie) Johnson, Ruth grew up in Millville and graduated from Millville High School, Class of 1948. She worked in her family's business, Johnson Brothers in Millville for many years. She then worked for Wheaton Glass Co. and Durand Glass Co. as a Packer and retired from both companies. Ruth was a 60 year member of New Hope United Methodist Church, formerly called Second United Methodist Church in Millville. She was also a member of the GPPAW Local No. 219 and the GMP. She was an avid reader, enjoyed going to the beach during the summer months, and spending time with her family. Ruth is survived by two brothers, Walter R. Johnson and George Johnson; and many nieces, nephews, great, and great great nieces and nephews. She was predeceased by her siblings, Adele (Airey) Gifford, Louis Airey, Andrew Airey, Dorothy Johnson, Hannah (Johnson) Kohler and Richard Johnson. Graveside services will be conducted at 10 a.m. on Friday, April 14, 2017 in Mt. Pleasant Cemetery, Millville. Memorial contributions can be made to the New Hope United Methodist Church, 2018 Newcombtown Road, Millville, NJ 08332.

The family of Mabel Ruth Johnson created this Life Tributes page to make it easy to share your memories.

Send flowers to the Johnson family.