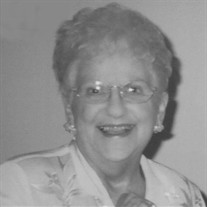 Lucille "Lu" Audrey (Gennerich) Reger, age 98 of Millville, passed away Wednesday evening, September 15, 2021 at Inspira Medical Center, Vineland. Lu was born in North Plainfield to the late Walter and Dolly (Mantz) Gennerich, and graduated from North Plainfield High School. One day while she was commuting on the train to NYC, she met her husband Lyman, who, at that time was serving in the United States Military. They were soon married in 1947. In 1955, she and her family moved to Millville and became lifelong residents. Lu worked part time for Kane's Coal, Dr. Fithian and the Millville Public Library, along with working as a substitute teacher in Millville. An avid and outstanding Bridge player, Bridge was her main interest, along with being an Honorary 63 year Member of the Millville Woman's Club. She was also a longtime member of the First Presbyterian Church on Maurice River and the First United Methodist Church, both of Millville. Lu will be sadly missed by her children, Joanne Reger and Stephen Reger, both of Vineland; one niece Liz Courain (David); and one nephew Bob Courain (Ruth). She was predeceased by her husband Lyman Jr. in 1985; and her sister Dorothy Courain. Lu succumbed to Covid even though she was vaccinated. For this reason the family will have a private interment in the family plot in Westfield. Arrangements are under the direction of Christy Funeral Home, Millville. Donations in memory of Lucille Reger can be made to the Millville Woman's Club, 300 E. Street, Millville, NJ 08332 or to the Millville Public Library, 210 Buck Street,, Millville, NJ 08332. Memories and expressions of sympathy for Lucille A. Reger can be shared on the Obituary Tribute Wall at www.christyfuneralservice.com

The family of Lucille Audrey Reger created this Life Tributes page to make it easy to share your memories.

Send flowers to the Reger family.