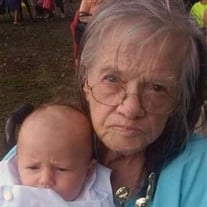 Lorraine Althea Pruyn, age 79 of Millville, returned home to the Lord on Sunday evening, November 26, 2017 after a brief illness. Born in Long Island, NY, to the late John Ernest II and Virginia Margaret (Fitzgerald) Pruyn, Lorraine was raised in Prospect Park, NJ. She attended High School in Prospect Park and then moved to Apopka, FL. Lorraine lived in many different places throughout her life. She was last known to have lived in West Monroe, LA before moving back to South Jersey four years ago to live with her daughter in Millville. Lorraine had an interesting career working for many years as a lot attendant for several different auto auction companies, including Florida Auto Auction and then New Jersey Auto Auction. She truly enjoyed driving lots of different vehicles, especially the antique cars. She also spent a few years working for Mae's Fabric in Florida. Over the years, Lorraine also operated two small businesses, Wade Cypress Products & Foliage and Lorraine's Creations. Arts & crafts, knitting, sewing, and crocheting were but a few of Lorraine's favorite pastimes. She was a member of Daughters of the King and was also a Girl Scout. She also enjoyed camping, swimming, parades, and traveling to theme parks of all kinds. Lorraine will be sadly missed by two daughters, Diane Stiles of Millville and Patricia Lamp of Florida; two sons, Louis Deinert II of Millville and John Deinert of Ruston, Louisiana; brother Harry Blake Pruyn of North Jersey; sister Sandra Janet Pruyn of Frederick, Maryland; many grandchildren; many great-grandchildren; many nieces, nephews, and cousins; her loving cat, Snowflake; and her dog. She was predeceased by two husbands; sister Jackie Pruyn; and her great grandson Richard Haasch III. Services for Lorraine will be private at the convenience of the family. Arrangements are under the direction of Christy Funeral Home, Millville. Memories and expressions of sympathy for Lorraine A. Pruyn may be shared on the Obituary Tribute Wall at: www.christyfuneralservice.com.

The family of Lorraine A. Pruyn created this Life Tributes page to make it easy to share your memories.

Send flowers to the Pruyn family.