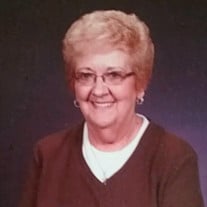 Lois Fauver, age 83, died peacefully on December 29, 2016 with her shih-tzu, named Max, by her side. She had suffered from Alzheimer's Disease since 2006. Lois grew up in Millville and graduated from Millville High School, Class of 1950. She worked as a school secretary at Western School and as a secretary in the Tax Office at the Millville City Hall. Lois enjoyed watching the Phillies, dining out, shopping, playing cards with her friends, baking, and spending time with her grandchildren. She was a faithful fan whenever they played soccer, basketball, or baseball. When she was younger, Lois was always taking care of others and did so with compassion and humor. Throughout her life, she was very generous with her friends and family. Her favorite vacations were spent in Cape May, Ocean City, Myrtle Beach, and Lancaster. Lois was predeceased by her husband Joseph (Budd) Fauver to whom she was married for 41 years, her sister Evelyn Childs and brother Harold Burkhart. Lois is survived by her sisters Grace Moniot of Roslyn, PA, and Eileen Elliot of Snohomish, WA; son Joseph Fauver Jr. and his wife Jean of Millville; daughter Cheryl Wnorowski and her husband Skeeter from Pitman; three grandchildren Jennifer Fauver of Millville, and Heather and Jason Wnorowski of Pitman; three step-grandchildren Amy Ash and Kevin Klein from Binghamton, NY, and Kelly Brown of Effingham, SC; and one great granddaughter, Lucy Ash of Binghamton, NY. There will be a private family viewing at the convenience of the family. A Celebration of Life will be held at 1 p.m. on Saturday, January 7, 2017 in the Cumberland County Community Church, 1800 E. Broad St., Millville. Arrangements are under the direction of Christy Funeral Home, Millville. In lieu of flowers, the family requests donations be made to the Alzheimer's Research and Prevention Foundation at the website: www.AlzheimersPrevention.org. Memories and expressions of sympathy for Lois Fauver may be shared on the Obituary Tribute Wall at www.christyfuneralservice.com.

Lois Fauver, age 83, died peacefully on December 29, 2016 with her shih-tzu, named Max, by her side. She had suffered from Alzheimer's Disease since 2006. Lois grew up in Millville and graduated from Millville High School, Class of 1950.... View Obituary & Service Information

The family of Lois L. Fauver created this Life Tributes page to make it easy to share your memories.

Send flowers to the Fauver family.