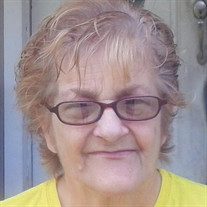 Linda L. (Force) Robinson, age 61 of Eldora, passed away Friday, July 8, 2016 at Cape Regional Medical Center in Cape May Court House. She lived a full life prior to battling a long illness. Born and raised in Millville, Linda graduated from Millville High School, Class of 1972. She's lived in Eldora for over 40 years. Linda worked at the Cape May County Special Services School, as a Custodian for over ten years and retired. She loved her children and grandchildren, and she was a very trusting and compassionate person. Linda will be sadly missed by her partner Donald C. Robinson Sr. of Eldora; her children, Donald C. Robinson Jr. and wife Kimberly of Millville, and Felicia R. Robinson of Millville; one sister Lori Kennedy of Laurel Lake; three brothers, Harold Force of Laurel Lake, Harry Force of NJ, and Eddie Force of Millville; eight grandchildren, Jordan Makris, Tamaraty Robinson, Alyssa Robinson, Zackary Robinson, Daniel Blake, Makenzie Blake, Madison Endacott and Jonathan Endacott. She was predeceased by her parents, Harold and Alma (Baker) Force. Funeral services will be conducted at 11 a.m. on Tuesday, July 12, 2016 in the Christy Funeral Home, 11 W. Broad Street, Millville. There will be a viewing on Tuesday from 9 to 11 a.m. in the funeral home. Burial will be in Daretown Presbyterian Church Cemetery, Daretown. Memories and expressions of sympathy for Linda Robinson may be shared on the Obituary Tribute Wall at www. christyfuneralservice.com.

The family of Linda L Robinson created this Life Tributes page to make it easy to share your memories.

Send flowers to the Robinson family.