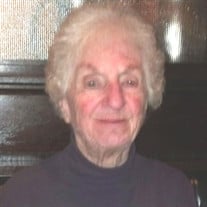 Lillian "Lil" Elsie (Bradway) Hoffman, age 82 of Millville, passed away peacefully, surrounded by her loving family, Sunday Morning, July 1, 2018, at HealthSouth Rehabilitation Hospital of Vineland, after an extended illness. Born and raised in Millville to the late Charles and Lillian (Zimmerman) Bradway, Lil was a lifelong resident. Lil attended Millville High School, then went on to marry her husband, Robert and together they shared nearly 50 years of marriage together, until he passed away in 2001. Lil was a homemaker and took great pride in raising her family. She had also been a member of the Kingdom Hall of Jehovah's Witnesses in Millville, where she had made many friends over the years. She also enjoyed going out to eat and traveling to places like Lancaster and Disney in Orlando. But most of all, Lil cherished the time that she was able to share with her family. Lil will be sadly missed by her two sons, Robert C. Hoffman, Jr. and wife Sue of Millville and Charles B. Hoffman and wife Laura of Vineland; one daughter, Rachel Bottorf and husband John of Millville; one sister, Clara Bush of Vineland; four grandchildren, Steven, Cody, Michael, and Cyndi; two great-grandchildren, Scarlet and Cory; and her many beloved cats. She was predeceased by her husband, Robert Conover Hoffman, Sr.; and one sister, Lois J. Breeden. Services for Lil will be private at the convenience of the family. Arrangements are under the direction of the Christy Funeral Home, Millville. Memories and expressions of sympathy for Lillian E. Hoffman may be shared on the Obituary Tribute Wall at: www.christyfuneralservice.com.

The family of Lillian "Lil" Hoffman created this Life Tributes page to make it easy to share your memories.

Send flowers to the Hoffman family.