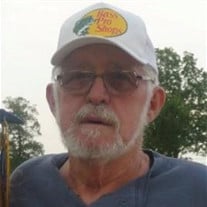 Leon J. "Bubba" Caregnato Jr., age 79 of Vineland, passed away Monday, April 3, 2017. Bubba retired from South Jersey Gas Company. He was formerly partners with his wife Linda, owning and operating the Watering Hole located in Millville. In his younger years, Bubba was a volunteer Forest Firefighter, a Firearms instructor, and also a volunteer Firefighter. Bubba was a strong man with a big presence, very quick-witted and had many "Bub sayings." Truly an outdoorsman, he did all types of hunting. He enjoyed taking friends and family out fishing on his boat the "Undecided." A true sports fan, he especially followed the Phillies, Eagles and NASCAR racing. He lived a full and abundant life, and was surrounded by the best of friends, and an amazingly beautiful and loving family. Bubba was predeceased by his parents, Leon J. Caregnato Sr. and Katherine (Castellini) Caregnato; one sister Patricia (Caregnato) Hummel; and his second wife Cecilia (Hines) Caregnato. He is survived by his third wife Linda (LaRosa) Caregnato, and her children: Frank LaRosa and his son Joseph, and Sharon Fulginiti (Nick); children by his first wife Carol (Wolfe): Christine Caldiero, Susi Bingham (Kenneth), Lisa Palmer (Danny), and John Caregnato, all of Missouri; children by his second wife Cecilia: Katherine Horner (Bill), Mary Ellen Langley (Bill), Terri Shacklock, Mike Carter (Ami), Valerie Kidd (Ed), and Stephanie Russo (Tom); and many grandchildren, great grandchildren, nieces, nephews, cousins and friends. Funeral services will be conducted at 11 a.m. on Tuesday, April 11, 2017 in the Christy Funeral Home, 11 W. Broad Street, Millville. There will be viewings from 6 to 8 p.m. on Monday, and 10 to 11 a.m. on Tuesday in the funeral home. Burial will be private at the convenience of the family. Memories and expressions of sympathy for Leon J. "Bubba" Caregnato Jr. may be shared on the Obituary Tribute Wall at www.christyfuneralservice.com.

The family of Leon J. "Bubba" Caregnato, Jr. created this Life Tributes page to make it easy to share your memories.