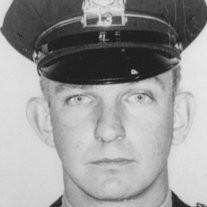 Lawrence C. "Dutch" Stiles, age 82 of Millville died Friday evening, Oct. 4, 2013 at his residence after an extended illness. Born in Millville, he grew up there and was a Millville High School graduate, class of 1950. He served in the U. S. Marine Corp for two years as a sergeant during the Korean War. He joined the Millville Police Force in 1956 and retired in 1982 as a detective. He also was as a police photographer. He had been awarded the Patrolman of the Year. Early on he had worked for South Jersey Gas Company for two years. He was a member of St. John Bosco Church and All Saints Parish. He was a member of the Knights of Columbus Council No. 1778 and was a 4th Degree Knight. He was a member of the Eagles FOE No. 1836 and had the distinction of serving as its youngest president. He belonged to several other organizations which included: the Millville Elks BPOE No. 580, the Bush-Kerrick VFW Post, the Nabb Leslie Post No. 81 of the American Legion, PBA Local No. 213, and the South Millville Gunning Club. His lifelong hobbies were fishing, hunting, and singing tenor with barber shop quartets. Most recently, and due to his physical restrictions, he was content watching televised sporting events. He is survived by his wife of 56 years Kathleen (Taylor) Stiles, his son James J. Stiles and wife Constance of Millville; two daughters, Cynthia Malernee and husband Edward of Riverview, Michigan and Kathleen S. Meyer and husband James of Millville; a sister Dolores Kaneaster of Kerbyville, Missouri; four grandchildren, Dallas Chain III, Edward Malernee Jr., Lauren Stiles, and Lawrence Stiles; a step-grandson Daniel Duffy, two step-granddaughters, Ashley Selover and Sandra Hartem; and one great-grandchild Lawrence Stiles Jr.; two step-great-granddaughters, Leah Duffy and Mariah; and one sister-in-law Emily Stiles. He was predeceased by his parents Raymond "Dutch" and Margaret (Covedale) Stiles; a brother George Stiles; and two sisters, Jean Fazzolari and Ethel Dorman. The family has requested donations to the American Cancer Society, 1851 Old Cuthbert Road, Cherry Hill, NJ 08034. Memories and expressions of sympathy for Dutch may be shared on the Obituary Tribute Wall at: Christyfuneralservice.com.

Lawrence C. "Dutch" Stiles, age 82 of Millville died Friday evening, Oct. 4, 2013 at his residence after an extended illness. Born in Millville, he grew up there and was a Millville High School graduate, class of 1950. He served in the... View Obituary & Service Information

The family of Lawrence C. Stiles created this Life Tributes page to make it easy to share your memories.

Send flowers to the Stiles family.