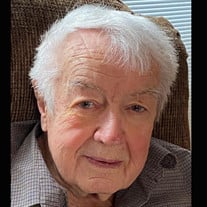 Lawrence “Larry” LaVaughn Sharpless Jr., also affectionately known as "Uncle Buddy," age 89 of Swedesboro, passed away peacefully on Monday, July 19, 2021, surrounded by his children and daughter-in-law, at Inspira Medical Center in Mullica Hill.   Born and raised in Millville to the late Lawrence and Helen (Richards) Sharpless, Buddy graduated from Millville High School, Class of 1949.  He went on to serve our country in the U.S. Navy during the Korean War from 1952 to 1955.  While stationed in Corpus Christi, Texas, and attending Del Mar College, Buddy met his beloved wife, Vida Holland, and they shared 58 years of marriage together until Vida's passing in June 2017.  Buddy earned his bachelor's degree from the University of Texas, Class of 1958, and then obtained his master's degree from George Washington University.    A 40-year employee of the Social Security Administration, his job took the family from Corpus Christi, to Jonesboro, Austin, and eventually to Baltimore. He was extremely dedicated to his profession, and received multiple honors, including the Commissioner’s Citation, the highest honor bestowed upon employees of the SSA. After retiring, Buddy and Vida moved to Smithville in 1998, and then to Swedesboro in 2007.    One of Bud’s greatest passions was traveling the world with his loving wife, Vida, who was often less enthusiastic about their adventures and sometimes had to be bribed to go along with his whims. Together they visited over 80 countries, including Antarctica, South Africa, the United Arab Emirates, Australia, Egypt, Russia, and many more. Though their happiest times together were just about anywhere with a dance floor. Their love for dance was a joy to see and it always seemed like they moved together as one being. Bud took great pride in teaching others. In earlier years, he taught Sunday school and in retirement, he kept busy by volunteering with Global Volunteers where he taught English in places like Peru, Romania, and China. He loved sailing (especially on the Corpus Christi Bay) and enjoyed growing vegetables and beautiful flowers in his gardens. Buddy also had a great love for animals, and in his final months could often be seen napping with his faithful grand-dog, Georgie. But most of all, he treasured the time that he was able to share with his family, especially his three grandchildren, whom he was incredibly proud of and loved dearly.   Buddy will be deeply missed by his daughter Dana Sharpless; his son and daughter-in law Terry and Laura Sharpless; three grandchildren, Kristie Gleason, Kimberly Forsythe, and Austin Sharpless; and five great-grandchildren, Jack, Isla, Clara, Miles, and Liv.  He was predeceased by his wife Vida (Holland) Sharpless; one brother Lewis Sharpless; and two sisters, Frances Prichett and Joan Riggins.   A Memorial Graveside Service for Buddy will be conducted on Tuesday, September 14, 2021 at 11:00 a.m. in Mt. Pleasant Cemetery, Millville.   Arrangements are under the direction of Christy Funeral Home, Millville.   Memorial contributions in loving memory of Buddy may be made to an Animal Rescue of one's choice.   Memories and expressions of sympathy for Lawrence "Buddy" L. Sharpless may be shared on the Obituary Tribute Wall at: www.christyfuneralservice.com.

The family of Lawrence "Larry" L. Sharpless, Jr. created this Life Tributes page to make it easy to share your memories.