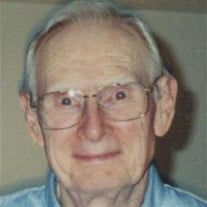 Lawrence A. Bohm passed away peacefully at home on January 1, 2019 at the age of 88. Born and raised in Millville, Larry was a graduate of Millville Senior High School, Class of 1948. Larry was a talented drummer, having played the drums in the Navy Band and also for President Harry Truman's Second Inauguration. After his honorable discharge from the United States Navy, Larry took advantage of the GI Bill and took classes which enabled him to become a Draftsman, designing aircraft wings for Boeing, Lockheed-Martin, and McDonnell-Douglas. During this time, Larry lived and traveled all over the country, first retiring in Roswell, NM, and finally, Vineland, NJ. Larry was an active band member of the American Legion in Salem, and he enjoyed traveling. Larry was predeceased by his parents, Lorenzo and Alverta (Fox) Bohm; and his sisters and brothers, Newell Cossaboon, Loren Cossaboon, R. Wayne Cossaboon, Janet Monari, Ellen Graiff, and Ruth Zambone, as well as his niece Beth Page. Larry is survived by his nieces and nephews, Lisa Basile (Jeff), Rhonda Meredith (Dave), Jana Babino, and Craig Cossaboon, as well as his sister Alonda Giguere of Vero Beach, FL; and two cousins, James L. Schenck and David Schenck, along with many great nieces and nephews. Larry was the epitome of generosity, having funded college education for several of his nieces and nephews. Larry was loved by all, and will be sadly missed. The family wishes to thank the entire teams of Bayada and Griswold for their devoted and compassionate care, as well as Bishop McCarthy Residence where Larry was a resident for approximately six weeks several months ago. Graveside services will be held at 12 noon on Saturday, January 12, 2019 in Greenwood Memorial Park, 10th and Broad Streets, Millville. Arrangements are under the direction of Christy Funeral Home, Millville. As per Larry's wishes, the family requests memorial contributions to be made to South Jersey Regional Animal Center (SPCA), 1244 N. Delsea Drive, Vineland, NJ 08360. Memories and expressions of sympathy for Lawrence Bohm may be shared on the Obituary Tribute Wall at www.christyfuneralservice.com.

Lawrence A. Bohm passed away peacefully at home on January 1, 2019 at the age of 88. Born and raised in Millville, Larry was a graduate of Millville Senior High School, Class of 1948. Larry was a talented drummer, having played the drums... View Obituary & Service Information

The family of Lawrence Alvin Bohm created this Life Tributes page to make it easy to share your memories.

Lawrence A. Bohm passed away peacefully at home on January 1,...

Send flowers to the Bohm family.