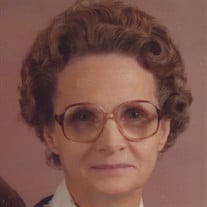 Edna Lavona (Faber) Burgess, age 94 of Millville, passed away peacefully, early Tuesday morning, September 13, 2016, after a lengthy illness. Born and raised in Kilarm, West Virginia, to the late William and Emma (Blare) Faber, Lavona moved to Millville with her husband, Loyce, in 1972. She worked at Wheaton Glass Company for ten years as a packer, retiring in 1984. Lavona was a member of the Central Baptist Church in Millville for many years. Her favorite pastime was baking, actually burning out three ovens in her lifetime. Most of all, she enjoyed spending time with her family and friends. Lavona will be sadly missed by her four sons Loyce Franklin Burgess of Millville, Teddy L. Burgess and wife Erica of Millville, Alvin Burgess and Carolyn of Millville, and Bruce Burgess and wife Donna of Quakertown, PA; one sister Martha Bennington of PA; six grandchildren Frank Burgess, Jr., William Burgess, Jennifer, Kelly, Loni, and Carrie Sue; and several great-grandchildren. Lavona was predeceased by her husband, Loyce William Burgess; four sisters Catherine Harney, Edith Crane, Frances Grimes, and Anna Stern; three brothers Bill Faber, Paul Faber, and Dolan Faber; and one grandson Teddy Burgess, Jr. Private services and burial will be in Fairmont, WV, at the convenience of the family. Arrangements are under the direction of Christy Funeral Home, Millville. Donations may be made in Lavona's memory to Central Baptist Church, 9 North 2nd St., Millville, NJ 08332 or The Salvation Army, 733 E. Chestnut Ave., Vineland, NJ 08360 or online at http://newjersey.salvationarmy.org/NewJersey/vineland. Memories and expressions of sympathy for Lavona Burgess may be shared on the Obituary Tribute Wall at www.christyfuneralservice.com.

The family of Lavona Burgess created this Life Tributes page to make it easy to share your memories.

Send flowers to the Burgess family.