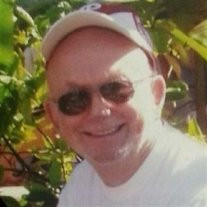 Kenneth B. Taylor Sr., age 80 of Millville died suddenly Sunday, November 24, 2013 in Lankenau Hospital, Cynwyd, PA. Born in Lawrence Township, he grew up in Center Grove and attended R. D. Wood School, Millville and Millville High School. He had worked for Wheaton Glass Co. as a Colors Foreman in the Decorating Department. He started working for Wheaton Glass on his 18th birthday and was employed for 47 years before he retired. He was a member of the GMP Local No. 219 Union. Most recently he was the co-owner and chocolate maker of Custom Cakes and Lollipop Tree of Millville. He retired the second time three years ago. He was a member of the Second U. Methodist Church of Millville. He had coached in the Women's Softball League for the Millville Hospital for many years. He was an avid Philadelphia sports fan and enjoyed spending time with his family, especially traveling and camping. He is survived by his wife Charlotte "Cookie" (Roche) Taylor; two sons, Kenneth B. Taylor Jr. and wife Sonja and R. Edward Taylor and wife Rhonda; two daughters, Cathy A. Cramer and husband Lester and Debra J. Cheesman and husband Garry; one brother Sherman Taylor Sr. and wife Shirley all of Millville. He is also survived by 11 grandchildren, Amber Botticello, Jacob Taylor, Rebecca Taylor, Joshua Taylor, Benjamin Taylor, Evans Klawitter, Shane Klawitter, Gabrial Cramer, Dawn Brown, Garry Cheesman Jr. and Deric Cheesman; nine great-grandchildren; and many nieces, nephews, and cousins. He was predeceased by his parents, Lehman and Marquerite (Folger) Taylor; two brothers, Joseph C. Taylor and G. Carl "Tack" Taylor; and one sister Barbara Rose Pearce. There will be a memorial service Sunday, Dec. 1, at 3 p.m. in the Second U. Methodist Church, Church and McNeal Streets, Millville. There will be a calling hour from 2 to 3 p.m. before the service. Burial will be private at a later date. The family requests memorial donations to the Second U. Methodist Church, 801 Church St., Millville, NJ 08332. Arrangements are under the direction of Christy Funeral Home, Millville. Memories and expressions of sympathy for Kenneth may be shared on the Obituary Tribute Wall at Christyfuneralservice.com.

The family of Kenneth B Taylor Sr. created this Life Tributes page to make it easy to share your memories.