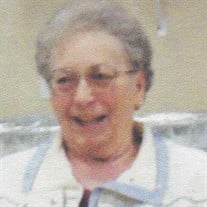 Kathleen M. (Taylor) Stiles, age 77 of Millville, passed away Tuesday, February 28, 2017, at home after an extended illness. Mrs. Stiles was born and raised in Millville, graduating from Millville High School, class of 1957. She earned an Associate's Degree in Elementary Education from Cumberland County College and taught as a substitute teacher in local grammar schools. Until retirement, she was employed as a Senior Supervising Officer at Cumberland County Juvenile Detention Center. For over 30 years, Mrs. Stiles never missed an election working for the Cumberland County Board of Elections at the polls on Millville's Westside. Her interest in politics and her famous trips to the microphone during Millville City Commission Meetings will be fondly remembered by all who knew her. She was also a staunch member of the Millville Woman's Club. Kathleen was a homemaker, married to Lawrence "Dutch" Stiles in 1957 until his death in 2013. She enjoyed many years as an Explorer Post Scout Leader at St. John Bosco Roman Catholic Church, where she was also a member of the Parish Ladies Guild. Canning vegetables, gardening, arts & crafts, and crossword puzzles were some of her many hobbies. An avid reader, she kept abreast of local, national, and world news. She was a good neighbor and friend to all who knew her. Mrs. Stiles will be greatly missed by her daughters, Cynthia (Edward) Malernee, Kathleen (James) Stiles-Meyer; son James (Constance) Stiles; grandchildren Dallas Chain III, Edward Malernee, Jr., Ashley Selover, Lauren and Lawrence Stiles, Daniel Duffy, Sandy Hartem; great grandchildren Lawrence R. Stiles, Leah Duffy, Mariah Purificato, Melody White, and Jaxson Duffy; and many nieces, nephews, and cousins. She was predeceased by her parents Harry and Thelma (Riley) Taylor; and sisters Elizabeth, Lillian, and Doris. A Funeral Mass will be celebrated at 12 noon on Saturday, March 4, 2017 at the Parish of All Saints, Buck and Depot Streets, Millville. There will be a viewing on Saturday from 9 a.m. to 11:30 a.m. in the Christy Funeral Home, 11 W. Broad St., Millville. Burial will be in Centre Grove Cemetery. In lieu of flowers, the family requests contributions to the American Heart Association, 1 Union St. #301, Robbinsville, NJ 08691. Memories and expressions of sympathy for Kathleen M. Stiles may be shared on the Obituary Tribute Wall at: www.christyfuneralservice.com.

The family of Kathleen M. Stiles created this Life Tributes page to make it easy to share your memories.

Send flowers to the Stiles family.