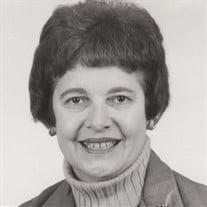 Joyce Vanaman, retired long-time reporter for The Press of Atlantic City, died Thursday evening, January 10, 2019. She was 89 years-old. Joyce was pre-deceased by her husband of 41 years, Harold “Bud” Vanaman, and their son, David Keith Vanaman. She is survived by her sister-in-law Miriam Rhubart and husband Clyde of Florida, and a number of nieces and nephews. A graduate of Douglass College, Rutgers University, where she majored in journalism, Joyce was a member of Kappa Tau Alpha, academic journalism society. Prior to working for The Press, Joyce worked for the Somerset Messenger-Gazette in Somerville; Institutions Magazine in Chicago, and WWBZ in Vineland. Joyce began her association with THE PRESS in 1961 as a correspondent; later became a staff writer, and retired in February 2006. She continued to write Community features for THE PRESS until the end of 2008. During her career, Joyce received numerous awards including the Pride in Millville Award from the Greater Millville Chamber of Commerce; Distinguished Service Award from the Millville Jaycees; Liberty Bell Award from the Cumberland County Bar Association, and RSVP Community Service Award from the Cumberland County Board of Freeholders and the Office on Aging and Disabled. Joyce was also recognized by the Cumberland County Planning Board, Millville Housing Authority, Shirley Eves Center, Cumberland County 4-H Leaders Association, N.J. Hospice & Palliative Care Organization, Millville Kiwanis Club, Big Brothers/Big Sisters of Cumberland and Salem Counties, Associate Alumnae of Douglass College, Millville Teachers Association, Cumberland Chapter of Zonta International and Cumberland County Disabled Advisory Council. At the time of her retirement, she was honored by the Millville City Commission, Center City Neighborhood Group and Third Ward Advisory Committee. A member of First United Methodist Church for more than 50 years, Joyce has been a volunteer in its SHINE outreach program. She was a member of the Millville Kiwanis Club, a life member of the Friends of the Millville Public Library and a member of the Associate Alumnae of Douglass College. Since her retirement, Joyce has been a volunteer for Big Brothers/Big Sisters, including its in-school and community-based programs, and she served as a mentor at Wood School. She received the R.D. Wood School Community Partnership Award, and particularly treasured her association with the wonderful staff at the school, as well as with the children. Her hobbies were reading, baking, traveling and knitting for the SPCA. She also enjoyed going to the Fitness Connection. A Celebration of Life Service will be conducted on Friday, January 18, 2019 at 1 p.m. in the First United Methodist Church, 201 North 2nd Street, Millville. Burial will be private. Memorial donations may be sent to the SHINE program of First United Methodist Church, P.O. Box 116, 201 N. Second St., Millville, N.J. 08332; Big Brothers/Big Sisters of Cumberland and Salem Counties, P.O. Box 2188, 1944 E. Landis Ave., Vineland, N.J. 08362, or the Millville Public Library, 210 Buck St., Millville, N.J. 08332. Memories and expressions of sympathy for Joyce Vanaman may be shared on the Obituary Tribute Wall at www.christyfuneralservice.com.

Joyce Vanaman, retired long-time reporter for The Press of Atlantic City, died Thursday evening, January 10, 2019. She was 89 years-old. Joyce was pre-deceased by her husband of 41 years, Harold &#8220;Bud&#8221; Vanaman, and their son,... View Obituary & Service Information

The family of Joyce Vanaman created this Life Tributes page to make it easy to share your memories.

Joyce Vanaman, retired long-time reporter for The Press of Atlantic...

Send flowers to the Vanaman family.