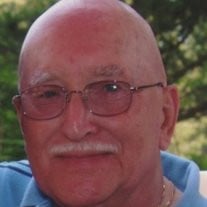 Joseph Charles Taylor Sr., age 88 of Millville, passed away Saturday evening at Inspira Health Center, Vineland after an extended illness. Born in Fairton, he grew up in Center Grove, and when the family farm became part of the Millville Army Air Field, the family moved to Millville. He attended Millville High School, and he joined the U.S. Army, serving in the 82nd Airborne during World War II. He attained the rank of T/4. For 42 years, Mr. Taylor worked for Wheaton Glass Co. as a Quality Control Supervisor, and he was a member of the GBBA Union. He also worked for Seabrook Farms. Mr. Taylor played softball and bowled in the Wheaton’s leagues. He enjoyed the car races at the Vineland Speed Way, and he was an avid hunter and fisherman. Mr. Taylor is survived by four sons, Joseph C. Taylor Jr. of Millville, Kenneth and wife Edith of Millville, Wayne and wife Debra of Millville and Lehman and wife Laura of Fairton; three daughters, Linda Birnstiel and husband Timothy of Millville, Mary Jo Romanik and husband Mike of Millville, and Margie Labas and husband John of Millville; two brothers, Sherman Taylor Sr. and wife Shirley of Millville, and Kenneth Taylor and wife Cookie of Millville; 17 grandchildren; 24 great grandchildren; two great great grandchildren; and many nieces and nephews. He was predeceased by two wives, Mary (Riendeau) and Beverly (Harris); one brother Tack Taylor; one sister Barbara Pierce; one grandson Teddy Harvey; and his parents, Lehman and Margie (Folger) Taylor. Funeral services will be conducted at 11 a.m. on Thursday in the Christy Funeral Home, 11 W. Broad Street, Millville. There will be a viewing on Thursday from 9 to 11 a.m. in the funeral home. Burial will be in Greenwood Memorial Park, Millville. The family requests memorial contributions to The Nature Conservancy, Attn: Maurice River Bluffs Preserve, 200 Pottersville Road, Chester, NJ 07930. Memories and expressions of sympathy for Joseph Taylor Sr. may be shared on the Obituary Tribute Wall at: www.christyfuneralservice.

Joseph Charles Taylor Sr., age 88 of Millville, passed away Saturday evening at Inspira Health Center, Vineland after an extended illness. Born in Fairton, he grew up in Center Grove, and when the family farm became part of the Millville... View Obituary & Service Information

The family of Joseph Charles Taylor Sr. created this Life Tributes page to make it easy to share your memories.