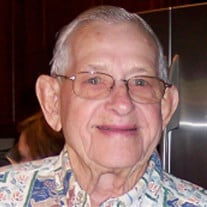 Joe aka “Buddy” passed away quietly on Jan 17, 2016, in his sleep after a short illness and complications of Congestive Heart Failure. Joe was born on Dec. 21, 1922 in Port Norris New Jersey, to Joseph and Elizabeth Lore. He was raised in Southern New Jersey where he learned to be an automobile mechanic as a child. He worked in the automotive industry all of his life until his retirement at age 77. During his last 30 working years, Joe worked with Dave Watson in Boone North Carolina building race cars on the NASCAR circuit for racing drivers Larry Pearson, Stanton Barrett, Mike Swame, Dale Jarrett, Larry Caudill, Davey Allison and Shawna Robinson. He traveled with the team, sometimes riding with the drivers, and had many racing stories that he loved to tell. His favorite being, he helped build the car that Shawna Robinson drove to win the title of being the only Woman to ever win a NASCAR race. For the past 14 years Joe lived with his Daughter in Sun Village, Surprise Arizona. He loved Racing and Baseball. He still followed racing on TV and traveled to the PIR whenever he could. He was the oldest Season Ticket Holder at the Surprise Stadium, home to the Texas Rangers and Kansas City Royals. He looked forward to Spring Training each year and meeting the players at the Meet and Greet Luncheon. He is survived by his Daughter Sandra Lore Baum formerly of Millville, now living in Surprise, Az, two sisters, Nancy Walsh of Vineland, Betty Dash of Millville, and a brother Herbert Lore of Stuart. Florida. 6 Grandchildren Tammy Nishida, Danette Trett, Shari Wilson, Robert Robinson, Michael Bareiszis, and Donavon Perry. Several Great Grandchildren Colton Nishida, Kainoa Nishida, Rozaline Voges, Cody Trett, Kaylie Wilson, Kira Wilson, Kami Kay Wilson, Teagen Speer, Grace Bareiszis, Brandon Robinson, Christy Robinson, Hope Perry, and Lee Perry, Preceding him in death was his first wife Ruth Corson Lore, a daughter Elma Jean Lore Greeson, a brother Sheppard Lore, and a sister Iva Jean Newcomb, and a grandson Mark Kevin Robinson. Joe raised 4 stepchildren. Dorain, Loraine, Elaine and Norman Oliver. Later in life Joe married Bonnie Proffitt of Boone North Carolina, who also preceded him in death. Joe was always happy and lived a full life. He was well loved by all who knew him. Funeral services will be conducted at 11 a.m. on Thursday, January 28, 2016 in the Christy Funeral Home, 11 W. Broad St., Millville. There will be a viewing on Thursday from 10 to 11 a.m. in the funeral home. Burial will be in Greenwood Memorial Park, Millville.

Joe aka &#8220;Buddy&#8221; passed away quietly on Jan 17, 2016, in his sleep after a short illness and complications of Congestive Heart Failure. Joe was born on Dec. 21, 1922 in Port Norris New Jersey, to Joseph and Elizabeth Lore. He... View Obituary & Service Information

The family of Joseph Marshall Lore Jr. created this Life Tributes page to make it easy to share your memories.