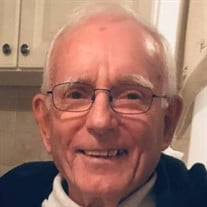 Joseph Peter Hanlon, age 86 of Millville passed away at home on Thursday, March 4, 2021 surrounded by his loving family. He had been in declining health for the past two years. Joe was born in New York City, NY and grew up in South Ozone Park, Queens, NY. He attended high school at St. Ann's Academy in NYC, graduating in 1952. He then joined the Army National Guard, serving eight years and holding the rank of Specialist Fourth Class. During that time he married the love of his life, Adrienne Mary (Sheehan), where they spent 60 wonderful years together. Joe had a long career in accounting, beginning with AMBAC Industries Inc. (Arma Division) in Garden City, NY. After relocating to Millville, he worked at Gould Inc., Glass Machine (Vineland, NJ) and retired from General Machinery (division of Wheaton Industries) in 2002. Throughout his accounting career he raised his family, put himself through college and, after 15 years, graduated from Dowling College in NY. He was a longtime member of St. John Bosco Catholic Church before it merged with The Parish of All Saints. He was also an active member with the Knights of Columbus - 1778 Millville Council, and was a 4th Degree Knight. From 1983 to 1984 Joe was a Grand Knight, and he was also honored as the Outstanding Knight of the Year in 1982 and 2004. Joe was an avid W.W.II history buff. Following the stock market, talking about politics, having lively conversations with family and friends, reading the newspapers, and going out to breakfast were a few of his favorite pastimes. Joe loved spending time at the beach house in Sea Isle City with his family and body surfing in the ocean with his grandchildren. Attending his grandchildren's many sporting events meant the world to him. Joe will be sadly missed by his three daughters, Patricia Burke (Joseph) of Chicago, IL, Maureen Smith (Robert) of Millville, and Denise Wright (Barry) of Cedarville; and seven grandchildren, Colleen and Michael Burke, Chelsea and Kevin Smith, and Branden, Justin and Ava Wright. He is also survived by his sister-in-law Carol Sheehan; nephews and a niece. Joe was predeceased by his wife, Adrienne; and his brother Peter Carson. A Mass of Christian Burial will be celebrated at 11 a.m. on Tuesday, March 9, 2021 at The Parish of All Saints, Buck and Depot Streets, Millville. Family and friends will be received on Tuesday from 9 to 10:40 a.m. in the Christy Funeral Home, 11 W. Broad Street, Millville. Burial will be in Holy Cross Cemetery, Millville. Out of consideration of others, please remember to wear a mask in the funeral home, church and cemetery, and please practice social distancing. The family requests memorial contributions to the New York Foundling Hospital @ www.nyfoundling.org, or to The Parish of All Saints, 621 Dock Street, Millville, NJ 08332. Memories and expressions of sympathy for Joseph P. Hanlon may be shared on the Obituary Tribute Wall at www.christyfuneralservice.com.

Joseph Peter Hanlon, age 86 of Millville passed away at home on Thursday, March 4, 2021 surrounded by his loving family. He had been in declining health for the past two years. Joe was born in New York City, NY and grew up in South Ozone... View Obituary & Service Information

The family of Joseph Peter Hanlon created this Life Tributes page to make it easy to share your memories.

Joseph Peter Hanlon, age 86 of Millville passed away at home...

Send flowers to the Hanlon family.