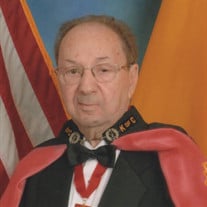 Joseph Michael DeStefano, age 87 of Millville, passed away peacefully, surrounded by his loving family, on Friday afternoon, March 31, 2017. Born and raised in Brooklyn, NY to the late Vincent and Mary (Falzia) DeStefano, Joe graduated from New Utrecht High School and attended CCNY. He met his late wife, Constance at a church dance in Brooklyn in 1951. They were married in 1953, and shared over 60 years of marriage together. Joe worked for 16 years as an aerospace engineer for Grumman in NY, and moved to Millville in 1974. He then worked for 18 years as a QA engineer for PSE&G at the Salem Nuclear Generating Station, retiring in July of 1992. He was a longtime member of the Parish of All Saints - St. John Bosco Church, serving as a Eucharistic Minister, head usher, and was a well respected member of the Parish and our community. Joe was a member of the Knights of Columbus, 4th Degree, Council No. 1778 of Millville. He was also a founding charter member of the ASQCA, South Jersey Chapter. He had many hobbies and interests, most recently making wine and beer - but most of all, Joe treasured the time that he was able to spend with his grandchildren, great grandchildren, and his whole family. Joe will be sadly missed by his two sons Joseph M. DeStefano II of Millville and Michael DeStefano and wife Jenine of Phoenixville, PA; two daughters Lori DeStefano of Keyport, NJ and Lisa Campochiaro of Deptford; two brothers Tony DeStefano and wife Mary of Turnersville, and Vincenzo DeStefano and wife Eileen of Port Jefferson, NY; four grandchildren Nicholas, Marissa, Gina, and Joseph; two great grandchildren Kendall and Jaxon; and many nieces, nephews, and cousins. He was predeceased by his wife, Constance (Beranato) in 2013; two brothers Paul and John DeStefano; and sister Jean Gergel. A Mass of Christian Burial will be celebrated at 11 a.m. on Thursday, April 6, 2017, in the St. John Bosco Catholic Church, 2 Hillcrest Avenue, Millville. There will be a viewing on Thursday from 9:45 to 10:45 a.m. in the Christy Funeral Home, 11 W. Broad Street, Millville. Burial will be in Holy Cross Cemetery, Millville. In lieu of flowers, the family requests memorial contributions to the Parish of all Saints, 621 Dock St., Millville, NJ 08332. Memories and expressions of sympathy for Joseph DeStefano may be shared on the Obituary Tribute Wall at: www.christyfuneralservice.com.

The family of Joseph M. DeStefano created this Life Tributes page to make it easy to share your memories.

Send flowers to the DeStefano family.