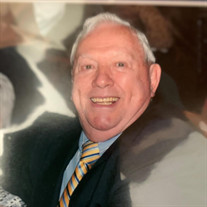 John F. "Jack" Stites, age 88 of Millville passed away, Friday morning, March 12, 2021 at home, surrounded by his loving family. He had been in declining health for the past year. Born in Vineland to the late Harry and Emma (Whilden) Stites, he attended Vineland High School and then joined the U.S. Army in 1953. In 1954 Jack was stationed in Germany where he drove trucks, completing his two year term. At the age of 16, Jack began driving tractor trailers part-time for local trucking companies which lasted his entire life. He was also a professional sign painter. One of his most well known designs is the current police patch that he created in 1963. That same year Jack joined the Millville Police Department, and after 25 years he retired as Sergeant in 1988. In 1966 he sang with the Barbershop Quartet during the Centennial. Jack was a member of the American Legion Nabb-Leslie Post No. 82 of Millville, the Fraternal Order of the Eagles, Aerie 1836 of Millville and the Italian American Political Club in Bridgeton. He enjoyed building and flying model airplanes, gardening, cooking, and fishing in the Bay on the "Born Loser." Jack will be sadly missed by his wife of 29 years, Sylvia (Huntley); his children, Wahnita (Stites) Finnegan and husband Mark, David R. Smith and wife Sue, and Craig Smith and wife Joann; five grandchildren, Kevin Manning and wife Josyln, Drew Finnegan, Michele Smith and wife Kristen, Kyle Smith, and Kourtney Smith and fiancé Robert Morris; two great grandchildren; and many nieces and nephews. He was predeceased by his grandson Marshall R. Smith. A private memorial service will be at the convenience of the family. Arrangements are under the direction of Christy Funeral Home, Millville. In memory of Jack, the family requests memorial contributions to the Marshall R. Smith Childhood Cancer Foundation, PO Box 304, Millville, NJ 08332. Memories and expressions of sympathy for John F. "Jack" Stites may be shared on the Obituary Tribute wall at www.christyfuneralservice.com.

John F. "Jack" Stites, age 88 of Millville passed away, Friday morning, March 12, 2021 at home, surrounded by his loving family. He had been in declining health for the past year. Born in Vineland to the late Harry and Emma (Whilden) Stites,... View Obituary & Service Information

The family of John F. "Jack" Stites created this Life Tributes page to make it easy to share your memories.

Send flowers to the Stites family.