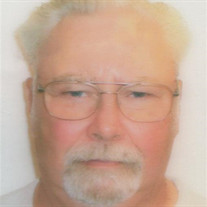 John Franklin Rice, age 69 of Millville, passed away peacefully, surrounded by his loving family, on Saturday, July 28, 2018 at Inspira Medical Center in Vineland. Born and raised in Millville to the late Warren and Ida (Doran) Wilson, John was a lifelong resident. He attended Millville High School and then went on to serve our country in the U.S. Army from 1967 to 1970. John married his wife, Joann, in 1968, and together they shared over 50 years together. Upon returning from his military service, John was a truck driver for over 45 years, working for many different local companies, until his retirement in 2011. He then worked for Millville Yellow Cab and then was a parts runner for NAPA Auto Parts in Vineland. John's favorite pastime was definitely riding his Harley with his wife, Joann. He also enjoyed bowling and tinkering with his collection of lawn equipment. Most of all, John cherished the time that he was able to share with his family. John will be sadly missed by his wife Joann (Pelikan) Rice; one son John W. Rice of Elmer; one daughter Sandra T. Rice-Gargon and husband Joe of Cedarville; two grandchildren, Vincent J. Bergeron of Millville and Tracy E. Bergeron of Cedarville; one sister Ivy Simpkins of Millville; and one brother Ray Rivera of Sicklerville. He was predeceased by his son Edward F. Rice in 1972; one brother Wayne D. Rice; mother-in-law Mary Pelikan; father-in-law Walter Pelikan; and his two half brothers, Jimmy and Skip Wilson. Family and friends will be received on Wednesday evening, August 1, 2018 from 6 p.m. to 8 p.m. in the Christy Funeral Home, 11 W. Broad Street, Millville. A graveside service will take place on Monday, August 6, 2018 at 11 a.m. in Mt. Pleasant Cemetery, Millville. Memories and expressions of sympathy for John Rice may be shared on the Obituary Tribute Wall at www.christyfuneralservice.com.

John Franklin Rice, age 69 of Millville, passed away peacefully, surrounded by his loving family, on Saturday, July 28, 2018 at Inspira Medical Center in Vineland. Born and raised in Millville to the late Warren and Ida (Doran) Wilson,... View Obituary & Service Information

The family of John F. Rice created this Life Tributes page to make it easy to share your memories.

Send flowers to the Rice family.