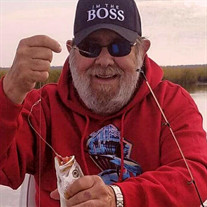 John Charles "Butch" Plummer Jr., age 75, passed away on Tuesday, March 27, 2018. John, a lifelong Millville resident was born May 3, 1942 at the old Millville Hospital. John was the son of the late Katherine Lillian (Hall) and John C. Plummer Sr. After attending Millville High School as a member of the Class of 1960, John enlisted in the U.S. Marine Corps. As an Electronics Tech in cryptography, he rotated through Vietnam on three different occasions. In 1965 he received an Honorable Discharge as an E-5 Sergeant. Back home he held jobs at different companies, including Dorchester Shipbuilding, Colonial Cruisers, Prudential Insurance Co., T.C. Wheaton Glass, Kerr Glass and Durand International. His last position was at the New Jersey Department of Corrections from which he retired. At home, John's life revolved around family, work, riding cycles and fishing. John was a Founding Member of the competition motorcycle club, South Jersey Scramblers. This club contributed large donations to numerous charities in the county. When he wasn't riding, he was fishing with his brothers, Pete and/or Kim. At 49 years of age, John decided to go to college. Three years later, working full time at the Department of Corrections, he nonetheless graduated from Cumberland County College with an Associate's Degree and from Stockton University with a Bachelor's Degree in Criminal Justice. He received the Silver Anniversary Award for Outstanding Student in Behavioral Sciences and achieved membership in Phi Theta Kappa, the International honor society. John will always be remembered for his exceptional intelligence, quick wit, and his love of family and friends. He lived by Semper Fi! In addition to his parents, John was preceded in death by his younger brothers, Tom and Wilbert (Pete) Plummer. He is survived by his loving wife Dr. Hellen Greenblatt; and his children, Stacy Plummer Vaughn, and Todd Richard Plummer (Jennifer). He is also survived by his grandchildren, Kaitlyn Derman Plummer, Devan Plummer, Xachery Plummer, Mercedes DeMore, and Julie McHugh; brother Kim Plummer (Nancy); and sister Irene (Bill) Hawn. Funeral Services will be conducted at 11 a.m. on Tuesday, April 3, 2018 in the Christy Funeral Home, 11 W. Broad St., Millville. Family and friends will be received on Monday from 6:30 p.m. to 8:30 p.m. and Tuesday from 10 a.m. to 11 a.m. in the funeral home. Burial will be in Chesed Shel Emeth Cemetery, Morias Ave., Millville. In lieu of flowers, please send contributions in John's memory to: Wounded Warriors Family Support [https://www.wwfs.org/wounded-warriors-family-support]. Memories and expressions of sympathy for John C. Plummer Jr. may be shared at www.christyfuneralservice.com.

John Charles "Butch" Plummer Jr., age 75, passed away on Tuesday, March 27, 2018. John, a lifelong Millville resident was born May 3, 1942 at the old Millville Hospital. John was the son of the late Katherine Lillian (Hall) and John... View Obituary & Service Information

The family of John Charles Plummer Jr. created this Life Tributes page to make it easy to share your memories.