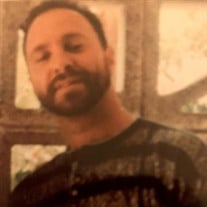 John Emile Musso, 58, most recently residing in Minotola, New Jersey, passed away unexpectedly on Friday, August 21, 2020. John was born in Bridgeton and raised in Vineland, New Jersey. As a young teen John moved to Ft. Lauderdale, Florida to be closer to family who had previously moved there. John remained a long-term resident in that area eventually moving back to New Jersey, once again to be closer to his beloved family. Education was extremely important to him and he continued his education after high school to include a technical degree in carpentry. John worked as an independent contractor through his business, JEM Consulting, performing roofing estimates and carpentry work for over 30 years in the Ft. Lauderdale, Florida area. John was well known in the area as a fair and honest businessman with a heart for those less fortunate. It was important to John that individuals received quality work that was within their financial means, often doing work for those less fortunate at cost, or without charge. In addition to being a consultant, John was the founder and owner of Jersey Boy’s Pizzeria in Ft. Lauderdale. John was a loving son, brother, uncle, great-uncle and friend. John was the father of two beautiful twins, Gianna and Johnny Jr. He loved his family unconditionally and was a peacemaker at any sign of conflict, always seeing the best in those around him. As a son, he called his mother several times a day making sure she was doing well and reminding her of his love for her. Those calls are and will remain dearly missed. John had special nicknames and jokes for each of his siblings, each left with fond memories of time spent with him over the years, good times and even those trying times. He assisted all family members in times of need, even preventing mortgage foreclosures asking nothing in return. It was nothing for him to walk into his young brother’s home, who was starting a family, and picking up utility, phone or other bills and silently paying them to lovingly help. He helped all family and friends either physically or financially when in need, not to mention strangers he’d meet along his life’s journey. John was most often referred to as the “favorite uncle” to his many nieces and nephews who will sadly miss his presence but keep their memories of him close at heart. John loved spending time with his family and friends, music, sports including and especially golf, bicycle rides to the beach, taking daily swims in the Atlantic Ocean, back yard grilling, and swimming in the pool with family. John will be fondly remembered for his love, caring demeanor, and infectious laugh. His memory will be forever embedded in the hearts and minds of all those who were blessed to be touched by his life. John is survived by his mother Barbara Ann Inman of Millville; three sisters, Delcena D. Fish and husband Wayne of Millville, Edna Diane Gill of Fletcher, NC, and Susan K. Musso-Ruberti (AKA Chach) of Winter Springs, FL; three brothers, Edward Donald Musso, Jr. of Newtonville, Jeffrey Joseph Musso of Stuart, FL, and Timothy Walter Musso and wife Jennifer of Millville; Many nieces, nephews, great nieces, great nephews, and cousins; his twins, Gianna and Johnny, Jr.; and his loving dog Arnie. He was predeceased by his father Edward Donald Musso, Sr. Funeral Services for John will be private at the convenience of the family. A celebration of his life will be held for family and close friends on Thursday, August 27, 2020 at 12:30 p.m. at Parvin State Park using the entrance past the one for campsites, on Parvins Mill Road, follow signs for Thundergust. The event will be under Pavilion B. Arrangements are under the direction of the Christy Funeral Home, Millville. Memorial contributions in loving memory of John may be made to St. Jude Children's Research Hospital, 501 St. Jude Place, Memphis, TN, 38105 or at the website: stjude.org. Memories and expressions of sympathy for John Emile Musso may be shared on the Obituary Tribute Wall at: www.christyfuneralservice.com.

The family of John Emile Musso created this Life Tributes page to make it easy to share your memories.

Send flowers to the Musso family.