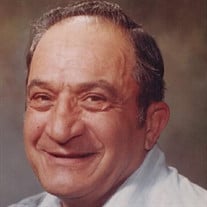 John F. Marone, age 94 of Bear, DE and formerly of Bridgeton, passed away Friday evening, April 22, 2016 at Season's Hospice at Christiana Hospital in Delaware. He had been in declining health for the past two years. Born in Redstone Twp., PA to the late Francesco and Filomena (Capana) Marone, he grew up in Philadelphia, PA and then moved to New Jersey, living in Port Norris, Bridgeton, and Elmer before moving to Delaware. For many years, Mr. Marone worked for Seabrook Farms as the Frozen Food Warehouse Manager, retiring in 1983. Mr. Marone was a member of St. Mary Church in Rosenhayn. He enjoyed gardening, landscaping, doing cryptograms, word jumbles, and crossword puzzles. He loved eating Italian food, traveling with his wife and spending time with his family. Mr. Marone will be sadly missed by his children, Francis J. Marone and husband John A. Carbo of Millville, and Joanne M. Eddy and husband James of Bear, DE; two sisters, Carmela Chillari of Bridgeton, and Elvira Saverine of Hopewell Twp.; one grandson John Paul Behrens and wife Stephanie of CT; and two great grandchildren, Xavier and Kaiden. He was predeceased by his wife Angelina in 1989; and his siblings, Vincenzo, Rosina, Salvatore and Rita. A Funeral Liturgy will be celebrated at 11 a.m. on Thursday, April 28, 2016 in The Parish of All Saints, Buck and Depot Streets, Millville. There will be a viewing on Thursday from 9 to 10:45 a.m. in the Christy Funeral Home, 11 W. Broad St., Millville. Burial will be in Holy Cross Cemetery, Millville. In lieu of flowers, the family requests donations to New Castle Health and Rehabilitation Center, in memory of John Marone, 32 Buena Vista Dr., New Castle, DE 19720. Memories and expressions of sympathy for John Marone may be shared on the Obituary Tribute Wall at www.christyfuneralservice.com.

John F. Marone, age 94 of Bear, DE and formerly of Bridgeton, passed away Friday evening, April 22, 2016 at Season's Hospice at Christiana Hospital in Delaware. He had been in declining health for the past two years. Born in Redstone Twp.,... View Obituary & Service Information

The family of John F. Marone created this Life Tributes page to make it easy to share your memories.

Send flowers to the Marone family.