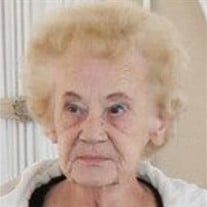 Joan Shirley (Sparks) Porter, age 82, of Millville, passed away Thursday evening, October 12, 2017 at Cooper Medical Center, Camden. She had been in declining health for the past year. Born in Millville to the late Linwood J. Sparks and Margaret (Wessolowski), she was a life long resident. For many years Shirley worked for L. and I. Dress Company and Model Blouse sewing factories. She then worked for IGA and Daunoras Family Market, both in Millville and retired after many years. Shirley volunteered as a Sunday School Teacher at West Side Methodist Church in Millville. She was also a cheerleading coach for Holly City Midget Football. She enjoyed going to the casinos, and watching her daughters play pool. Shirley will be sadly missed by her daughters, Clara Lowers (Frank Sr.) of Cedarville, Cathy Porter Jensen of Millville, and Jacalyn Warfle (Stacy III) of Millville; one sister Mary Louise Pio (Donald) of Vineland; ten grandchildren, Joan Mathias, Connie Parr, Frank Lowers Jr., Danielle Gonzalez, Tom Reed, Jack Warfle, Stacie Lynn Warfle, Darrick Warfle, Carl Smith, and De'Mya La'Cole Smith; 14 great grandchildren; three great great grandchildren; and many nieces and nephews. She was predeceased by her husband John B. Porter in 1993; one daughter Mary Louise Smith-Porter in 2013; and two brothers, Linwood G. Sparks, and John K. Sparks. Funeral services will be conducted at 12 noon on Tuesday, October 17, 2017 in the Christy Funeral Home, 11 W. Broad Street, Millville. Family and friends will be received on Tuesday from 10 a.m. to 12 p.m. in the funeral home. Burial will be in Mt. Pleasant Cemetery, Millville. Memories and expressions of sympathy for Joan Shirley Porter may be shared on the Obituary Tribute Wall at www.christyfuneralservice.com.

Joan Shirley (Sparks) Porter, age 82, of Millville, passed away Thursday evening, October 12, 2017 at Cooper Medical Center, Camden. She had been in declining health for the past year. Born in Millville to the late Linwood J. Sparks and... View Obituary & Service Information

The family of Joan Shirley Porter created this Life Tributes page to make it easy to share your memories.

Send flowers to the Porter family.