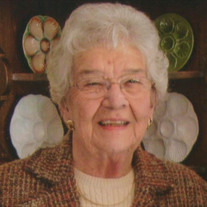 Joan Ann (Roselle) Griffiths, age 87, of Millville passed away Wednesday, July 25, 2018 at Inspira Medical Center, Vineland. She had been in declining health for the past month. Born and raised in Millville to the late Herbert and Anna (Parent) Roselle, she graduated from Millville High School, and was a life long resident. For over 20 years, Joan worked for Prudential Life Insurance Co. in Millville as a Supervisor and retired. She then worked for the Millville Board of Education as a Cafeteria Aide at Holly Heights School. Throughout her life she also worked as a Poll Worker for the Cumberland County Board of Elections. Joan was a member of the First Presbyterian Church on Maurice River in Millville. Taking trips to the beach and boardwalk in Ocean City were a few of her favorite pastimes. She enjoyed watching all professional sports, and attending "Third Fridays" with her late sister Helen, but most of all, she loved spending time with her family, grandchildren and especially her great grandchildren. Joan will be sadly missed by her daughter Peggy Huff and her husband Steve of Millville; one brother William Roselle of Towson, MD; three grandchildren, Steven Huff and wife Beata, Darren Huff and wife Ashleigh, and Julianne Mills; four great grandchildren, Karlie, Zachary, Rylee, and one great granddaughter arriving in September; and several nieces and nephews. She was predeceased by her husband Harry Griffiths Jr. in 1972; one daughter Rebecca Joan (Griffiths) Hanners; two brothers and sisters-in-law, Herbert (Gertrude) Roselle, and Paul (Ivy) Roselle; and one sister Helen Roselle. Funeral services will be conducted at 11 a.m. on Monday, July 30, 2018 in the Christy Funeral Home, 11 W. Broad Street, Millville. Family and friends will be received on Monday from 9:30 a.m. to 11 a.m. in the funeral home. Burial will be in Greenwood Memorial Park, Millville. In lieu of flowers, the family requests memorial contributions to The First Presbyterian on Maurice River, 119 N. Second St., Millville, NJ 08332 or to St. Jude Children's Research Hospital, 501 St. Jude Place, Memphis, TN 38105. Memories and expressions of sympathy for Joan Griffiths may be shared on the Obituary Tribute Wall at www.christyfuneralservice.com.

Joan Ann (Roselle) Griffiths, age 87, of Millville passed away Wednesday, July 25, 2018 at Inspira Medical Center, Vineland. She had been in declining health for the past month. Born and raised in Millville to the late Herbert and Anna... View Obituary & Service Information

The family of Joan Ann Griffiths created this Life Tributes page to make it easy to share your memories.

Send flowers to the Griffiths family.