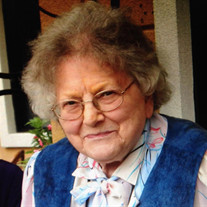 Jennie Mokrynski, age 96 of Millville, passed away peacefully early Wednesday morning, June 19, 2019, at Inspira Medical Center in Vineland, after a brief illness. Born and raised in Millville to the late Harry and Anna (Janisevicz) Mokrynski, Jennie was a lifelong resident. She graduated from Millville High School and then went on to attend Glassboro State College where she completed her undergraduate studies in education and then earned her Masters Degree in Education from the University of Pennsylvania. At age 19, she began teaching at Port Norris Elementary School. She then moved on to teach Elementary Education at Culver School in Millville for over 36 years, and then retired. Jennie absolutely loved her family, teaching, and music. Jennie was a longtime member of both West Side and Mt. Pleasant United Methodist Churches, where she was well known as an accomplished organist and musician for many, many years, finally retiring in 2010. She was also a member of the USO and frequently played the piano at the Millville Airport during World War II for the servicemen. Over the years, Jennie would often play the piano at many local dances and other events. She was truly gifted in her musical abilities and was admired by many in the community for such amazing talent. Jennie was an avid world traveler, starting in the 1950's. She was fortunate enough to have visited well over 130 countries! She especially loved traveling to Alaska, where she enjoyed dog sledding on the Iditarod trail several times over the years. She was also an honorary member of the Millville Woman's Club and other various women's organizations in our area. Most of all, Jennie treasured the time that she was able to share with her family, especially with her nieces and nephews. Jennie will be sadly missed by her brother, Donald Mokrynski of Closter, NJ; sister-in-law Marion Mokrynski of East Norriton, PA; two nephews, Greg Mokrynski, M.D. & wife Alice of Blue Bell, PA and Donald Mokrynski & wife Julie of Closter, NJ; two nieces, Dana Clark & husband William of Pine Beach, NJ and Christine DePalo and husband Michael of Cresskill, NJ; five great nieces, Stephanie Clark, Kaete, Isabella, and Kathryn Mokrynski, and Brianna DePalo; and two great nephews Brandon Clark and Michael DePalo. She was predeceased by two brothers, Leon and Edward Mokrynski; one sister Olga Somes; and one sister-in-law Suzanne Mokrynski. Funeral Services for Jennie will be held on Saturday, June 22, 2019 at 2:30 p.m. in the Christy Funeral Home, 11 W. Broad Street, Millville. Family and friends will be received on Saturday from 1:30 to 2:30 p.m. in the funeral home. Burial will be in Mt. Pleasant Cemetery, Millville. Memories and expressions of sympathy for Jennie Mokrynski may be shared on the Obituary Tribute Wall at: www.christyfuneralservice.com.

The family of Jennie Mokrynski created this Life Tributes page to make it easy to share your memories.

Send flowers to the Mokrynski family.