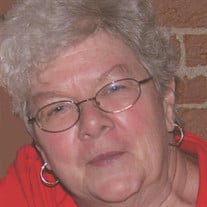 Jennie E. (Ford) Lewis, age 73 of Millville, passed away unexpectedly Wednesday, December 16, 2015 at Inspira Medical Center, Vineland. Born and raised in Millville, she graduated from Millville High School, and was a life long resident. Mrs. Lewis worked as a Secretary for Maul Bros. in Millville for a few years, before working for the Shirley Eves Center, where she was currently working and had worked for the past 30 years. She was a member of the Fourth United Methodist Church in Millville. She enjoyed spending time with her grandchildren, and she also enjoyed baking, especially cookies and cakes. Mrs. Lewis will be sadly missed by her husband Robert "Bob" Lewis; two sons, Robert "Bob" Lewis and wife Lorraine of Wilton, CT, and Charles "Chuck" Lewis and wife Jennifer of Millville; two sisters, Esther Ford of Millville, and Laura Ford of CA; one brother Roscoe Ford of Millville; six grandchildren, Cole, Cade, Brittany, Sarah, Elizabeth, and Abigail; and many nieces, nephews and cousins. She was predeceased by her parents, Roscoe and Jennie (Bryant) Ford; infant twin sons, Roscoe James Lewis and Kermit Joseph Lewis; and two brothers, James Ford and Charles Ford. Funeral services will be conducted at 11 a.m. on Monday, December 21, 2015 in the Christy Funeral Home, 11 W. Broad St., Millville. Family and friends will be received on Monday from 9 to 11 a.m. in the funeral home. Burial will be in Greenwood Memorial Park, Millville. The family requests memorial contributions to the Shirley Eves Center, 313 N. 10th St., Millville, NJ 08332. Memories and expressions of sympathy for Jennie Lewis may be shared on the Obituary Tribute Wall at www.christyfuneralservice.com.

The family of Jennie E. Lewis created this Life Tributes page to make it easy to share your memories.

Send flowers to the Lewis family.