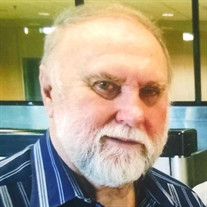 James "Jim" Leroy Luther, age 79 of Millville, passed away peacefully at home on Friday, May 29, 2020. Born in Spangler, PA to the late Leroy and Elma (Dunegan) Luther, Jim was raised in Patton, PA, where he graduated from Patton High School, Class of 1958. He went on to earn his Bachelor's Degree with a focus on library sciences and social studies from Clarion State College. Jim met and married his loving wife, Patricia, in 1963 while attending Clarion State, and they shared over 57 years of marriage together. After graduating from Clarion, Jim attended Kent State University, where he earned his Master's Degree in library science. Jim began a long career of teaching, first as head librarian for Beaver Falls High School in PA, and then moved to Millville where he was hired as Associate Professor: Director of Library Services at Cumberland County College for over 34 1/2 years, and retired. Jim loved traveling the world with his wife, Patricia. He enjoyed all types of music and sang in the Trojan Chorus for 24 years. In the 1950’s and 60’s, Jim played the trumpet in a marching band, dance hall band and a rock n’ roll band called "Dallas and the Rock-Its." They even cut a record in 1963 called “That Jim.” He was also well-known for his great joke telling abilities. Gardening, playing his Ray Anthony trumpet, and working in the yard were but a few of Jim's favorite pastimes. Most of all, Jim looked forward to spending time with his family, especially the great times with his granddaughter, Jade. Jim will be sadly missed by his loving wife Patricia (Stiller) Luther; his daughter, Jeannette Ethier and husband Scott of Land O' Lakes, FL; one brother Richard Luther of Bradford, PA; one sister Ruth Semonich of Patton, PA; one granddaughter Jade Ethier of Land O' Lakes, FL; and several nieces and nephews. He was predeceased by his two brothers, Robert and Howard Luther. A private Funeral Service for Jim will be conducted in the All Saints Cemetery, Newfield. Arrangements are under the direction of the Christy Funeral home, Millville. Memorial contributions in loving memory of Jim may be made to the Millville Public Library, 210 Buck Street, Millville, NJ 08332. Memories and expressions of sympathy for James "Jim" Leroy Luther may be shared on the Obituary Tribute Wall at www.christyfuneralservice.com.

James "Jim" Leroy Luther, age 79 of Millville, passed away peacefully at home on Friday, May 29, 2020. Born in Spangler, PA to the late Leroy and Elma (Dunegan) Luther, Jim was raised in Patton, PA, where he graduated from Patton High School,... View Obituary & Service Information

The family of James "Jim" Leroy Luther created this Life Tributes page to make it easy to share your memories.

Send flowers to the Luther family.