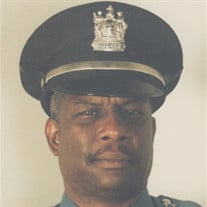 James Thomas Fisher Sr., age 64 of Millville, passed away Thursday evening, April 2, 2015 at his residence after a brief illness. Born in Yeadon, PA, Mr. Fisher grew up in Conshohocken, PA and graduated from Upper Merion High School. He then joined the U.S. Air Force and served as a Sergeant for four years during the Vietnam War as a Jet Engine Mechanic. He lived in the South Jersey area for 42 years, and worked for the State of New Jersey Department of Corrections at Bayside State Prison, and retired after 16 years in 2001 as a Sergeant. Prior to that, he worked as a Police Officer for the Bridgeton Police Department for five years. Mr. Fisher was a member of the New Jersey State Retired Police and Firemen's Association, Inc. Cumberland Local No. 7 Financial Secretary, and the American Legion Nabb-Leslie, Post No. 82 of Millville. He enjoyed traveling, cars, cooking, and he especially enjoyed his scheduled lunches on Wednesdays with his special friends. Mr. Fisher will be sadly missed by his wife, Kelliann (Baker); his children, Davenia Fisher, James Thomas Fisher Jr., Jaclyn Lynn Marie Fisher, Larry J. Chinnici, Hollie Bennett and Amanda Hawk; his siblings, Lillian B. Diaz, Brenda L. Wilkins, Nathaniel D. Fisher Jr., Elizabeth J. Fisher, Tony Battle and Cassandra Kearney; ten grandchildren; one niece; and six nephews. He was predeceased by one daughter Misty E. Fisher; his parents, Nathaniel D. Fisher Sr. and Lillian Thornton; and his stepfather John Osborne Battle. Funeral services will be conducted at 2 p.m. on Friday, April 10, 2015 in the Christy Funeral Home, 11 W. Broad Street, Millville. There will be a viewing on Friday from 12:30 to 2 p.m. in the funeral home. Burial with military honors will take place in the Cumberland County Veteran's Cemetery, Hopewell. In lieu of flowers, the family requests memorial contributions to the Officer Fred Baker Memorial Scholarship Fund, c/o Jason Baker, 22 Cormorant Way, N. Cape May, NJ 08204. Memories and expressions of sympathy for James T. Fisher Sr. may be shared on the Obituary Tribute Wall at: www.christyfuneralservice.com.

The family of James Thomas Fisher Sr. created this Life Tributes page to make it easy to share your memories.