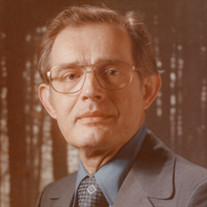 Ivan Kujdych, age 95 of Vineland, NJ, passed away peacefully at home on Monday, July 2, 2018, after a brief illness. Ivan was born in Drohobych, Ukraine and was a resident of Vineland for 55 years. He was a Research Poultry Pathologist with Rutgers University from 1959 to 1987. He fled from Ukraine with his mother and sister during World War II to Germany. After the war he resided in a displaced persons camp. During that time he continued his education at the University of Hannover where he earned a Doctorate of Veterinary Medicine. In Hannover, he met his future wife Nina Biletska. Ivan moved to the United States in 1949 and lived in Philadelphia. Nina moved to Philadelphia in 1950. They got married in 1952. Ivan and Nina moved to Vineland, NJ in 1960 when Ivan accepted a position with Rutgers University of New Jersey at the Poultry Research Center on Landis Avenue. This was a time when South Jersey was a major egg and poultry producer in the United States. He specialized in poultry biology, pathology and virusologie. He worked with other national researchers to develop vaccines for the poultry industry and helped local farmers with their stock. Ivan was a passionate historian of Ukrainian history. He had volumes of books on Ukrainian history, politics, and culture which he read. He taught Ukrainian History at the Ukrainian Heritage School in Philadelphia, where he influenced many students about Eastern European geopolitical history. Ivan was even more passionate about singing. He sang in choirs since he was a child in Drohobych, Ukraine. He continued singing in choirs in Germany and in choirs in the United States. He had a strong tenor voice. He participated in two church choirs where he was a regular attendee in the tenor section until just 2 years ago. Ivan is survived by his daughter, Dr. Natalia Kujdych; his son, Roman Kujdych and wife Luba; his grandchildren, Luke, Rostyk and Evanna; his niece from California Laryssa Matthews; a very special grandniece Natalia Griga, living in Elkins Park, PA; and many relatives in Ukraine. A funeral home visitation will be held on Friday, July 6, 2018 from 7 p.m. to 9 p.m. in the Christy Funeral Home, 11 W. Broad Street, Millville, NJ 08332. A Requiem service will begin at 8 p.m. Ivan Kujdych will be buried on Saturday, July 7, 2018 at 12:30 p.m. in St. Andrew Cemetery, 280 Main St., South Bound Brook, NJ 08880. In lieu of flowers, the family requests donations to the Ukrainian American Relief Committee Inc., 1206 Cottman Avenue, Philadelphia PA 19111 (email : [email protected]). Memories and expressions of sympathy for Ivan Kujdych may be shared on the Obituary Tribute Wall at www.christyfuneralservice.com.

Ivan Kujdych, age 95 of Vineland, NJ, passed away peacefully at home on Monday, July 2, 2018, after a brief illness. Ivan was born in Drohobych, Ukraine and was a resident of Vineland for 55 years. He was a Research Poultry Pathologist... View Obituary & Service Information

The family of Ivan Kujdych created this Life Tributes page to make it easy to share your memories.

Send flowers to the Kujdych family.