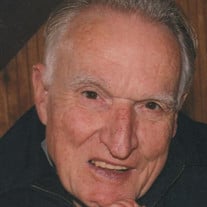 Irving "Irv" M. Watson, age 83, passed away peacefully on Saturday, September 15, 2018, surrounded by family at home. He is predeceased by his father Millard Watson; his mother Mary (Bowers); and his brother Stephen Watson. He married Vera "Tiny" (Wright) Watson on June 29, 1957. For 39 years, Irving worked at the West Co. in Millville until it closed. During that time he attended a technical school and received his Boiler Operator's License. He then worked for the Millville Board of Education, as Custodial Staff for many years at Silver Run Elementary School. Irving truly lived his life to the fullest, with many pleasures; his biggest pleasure being, spending time, taking care of, and spoiling his family. His motto was: "one day at a time," and as Irv would say, "Take it easy. See you sometime." He was a member of the National Rifle Association and Cumberland Rifleman Association. He was also active with the Millville Police Reserves. He is survived by his loving wife Vera "Tiny" Watson; his daughter Cindy Quinn (Ed); his sons, Stephen Watson Sr. (Rosa), and Les Watson (Vicki); his grandchildren, Paul Hand, Jenny Rowan (Kelly), Stephen Watson Jr. (Brooke), Shanna Watson (Shawn), Kasey Watson, and L J Watson; his great-grandchildren, Bradley Hand, Kaylee Watson, Alayna and Presley Daily, and Cassidy Rowan; and several nieces and nephews. A Funeral Service will begin at 1 p.m. on Friday, September 21, 2018 in the Christy Funeral Home, 11 W. Broad Street, Millville. Family and friends will be received on Friday from 11 a.m. to 1 p.m. in the funeral home. Burial will be in Mt. Pleasant Cemetery, Millville. If desired, in lieu of flowers, donations in memory of Irving M. Watson can be made to the National Rifle Association Foundation, 11250 Waples Mill Road, Fairfax, VA 22030. Memories and expressions of sympathy for Irving M. Watson may be shared on the Obituary Tribute Wall at www.christyfuneralservice.com.

Irving "Irv" M. Watson, age 83, passed away peacefully on Saturday, September 15, 2018, surrounded by family at home. He is predeceased by his father Millard Watson; his mother Mary (Bowers); and his brother Stephen Watson. He married... View Obituary & Service Information

The family of Irving M. Watson created this Life Tributes page to make it easy to share your memories.

Send flowers to the Watson family.