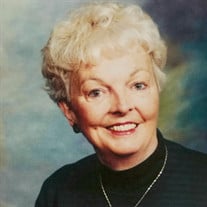 Irene Thompson Decker, age 85 of Millville, passed away peacefully after a brief illness on Thursday evening, December 12, 2019 at Cooper University Health Care, Camden. Born and raised in Millville to the late Clarence and Ruth (Magonigal) Thompson, Irene was a lifelong resident. She graduated from Millville High School, Class of 1951 and was a well known majorette. She then went on to attend Bucknell University in PA. For many years, Irene worked as a service rep. for NJ Bell Telephone Co. and retired. She then went on to work as an office manager for the Kejzman family for many years. Irene was a longtime member of First United Methodist Church in Millville, where she enjoyed serving on the Heart to Heart Committee and also served on the Worship Committee as Head Usher. A life and honorary member of the Millville Woman's Club for over 65 years, Irene served two terms as president and was a member of its Board of Managers for many years. She was also a past Southern District Vice President of the New Jersey State Federation of Women's Clubs. Irene was involved with and supported countless local organizations over the years. She was a past Matron and 60+ year member of the Shekinah Ch. #82 Order of the Easter Star and a past member of the Rising Star, Ch. #100. Irene was also a member of the Telephone Pioneers, Ducks Unlimited, and a past member of the Millville Hospital Auxiliary. At one time, she was appointed by Sumner Lippincott to serve on the City of Millville's Industrial Development Commission. Irene taught twirling for many years at Irene's Studio of Baton. She had many students over the years that competed and traveled across the country to many competitions. Irene enjoyed doing puzzles, especially crosswords. She especially enjoyed frequently going out to the Millville Queen Diner with her friends. Irene will be sadly missed by her cousins, Jay Reed and Dale Wettstein of Millville; many other cousins and friends; and her loving dog, Sweetie. She was predeceased by her husband Allen Decker, Jr., who passed away in 1995. A funeral service will be conducted on Thursday, December 19, 2019 at 11:00 a.m. in the Christy Funeral Home, 11 W. Broad Street, Millville. Family and friends will be received from 9:30 to 11 a.m. in the funeral home. Burial will be in Mt. Pleasant Cemetery, Millville. In lieu of flowers, memorial contributions in Irene's memory may be made to: First United Methodist Church of Millville, 201 N. 2nd Street, Millville, NJ 08332; The Millville Woman's Club, attn: Patti Kears, 300 E Street, Millville, NJ 08332; The Order of the Eastern Star Ch. #82, 22 Chancery Court, Millville, NJ 08332; or the South Jersey Regional Animal Shelter, 1244 N. Delsea Drive, Vineland, NJ 08360. Memories and expressions of sympathy for Irene Thompson Decker may be shared on the Obituary Tribute Wall at: www.christyfuneralservice.com.

The family of Irene Thompson Decker created this Life Tributes page to make it easy to share your memories.

Send flowers to the Decker family.