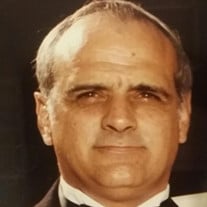 Hugo Martin Taberna, age 76 of Millville, passed away peacefully, surrounded by his loving family, on Monday morning, September 25, 2017.   Hugo was born and raised in Carmelo Colonia, Uruguay to the late Adoracion and Blanca (Bessero) Taberna.   He married his wife, Araceli (Molina) on February 6, 1969, and they shared over 48 years of marriage together.   Hugo and Araceli moved to the US on September 10, 1978 and settled in Millville in 1998.  Hugo worked at T-Fal, first in North Jersey and then in Millville, as a machine operator for over 30 years, retiring in 2005.   Hugo was a member of the Parish of All Saints in Millville.  He loved the ocean and spending summers in Wildwood Crest.  He also enjoyed traveling, and watching soccer and the History Channel.  Hugo also loved walking his dog, Roni.  Most of all, however, he treasured the time that he was able to share with his family, especially with his two grandchildren.   Hugo will be sadly missed by his wife, Araceli Taberna; two daughters, Jacqueline Brescia & husband Daniel of Millville and Fabiana Taberna of Millville; four brothers, Jose Taberna & wife Theresa, Alberto Taberna & wife Encarnacion, Yamandu (John) Taberna & wife Ruth, and Antonio Taberna & wife Alicia; two grandchildren, Alexander & Daniella Brescia of Millville; sister in law, Susana Villasante; many nieces, nephews, and cousins; and his loving dog Roni.  He was predeceased by one brother, Carlos Taberna.   A Mass will be celebrated at 11 a.m. on Friday, September 29th, 2017 in the Parish of All Saints, Buck and Depot Streets, Millville.  There will be a viewing on Friday from 9 a.m. to 10:30 a.m. in the Christy Funeral Home, 11 W. Broad Street, Millville.  Burial will be private.   In lieu of flowers, the family requests memorial contributions to St. Jude Children's Research Hospital, 501 St. Jude Place, Memphis, TN 38105 or online at www.stjude.org.   Memories and expressions of sympathy for Hugo Martin Taberna may be shared on the Obituary Tribute Wall at: www.christyfuneralservice.com.

The family of Hugo Martin Taberna created this Life Tributes page to make it easy to share your memories.

Send flowers to the Taberna family.