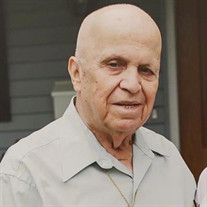 Herbert Wilmer Dunham, Jr. passed gently into the arms of his Savior on Sunday, November 29, 2020. Herb was born in Millville, NJ on March 13, 1932, to Herbert, Sr., and Edna (Mills) Dunham. He was raised in Millville and graduated from Millville High School in 1949. From there he attended Rutgers University in New Brunswick and graduated with a BS in Animal Husbandry in June, 1953. Within a few weeks of graduation he married the love of his life, Patricia Haggerty. Herb and Pat met at Second United Methodist Church, where they were members for over 50 years. He directed the Youth Choir, then followed his mother as the Senior Choir Director until 1979, when he lost his ability to sing due to throat cancer. He never wavered in his faith and continued to serve as Sunday School Teacher, Trustee and member of the Finance Committee and Church Council. Herb began his teaching career at Millville High School teaching agriculture, then moved to Woodruff School in Upper Deerfield Township where he taught Industrial Arts. He was a beloved Basketball Coach for several years, leading their team to championships. He implemented Field Day and several other activities until he retired in 1994 after 30 years. Herb and Pat enjoyed 12 years of retirement in North Port, Florida, until moving home in 2006 to be closer to their children and grandchildren. Above all, Herb loved the Lord and his family. He found special joy in being with his great-grandchildren. Upon returning to Millville he was an active member of Millville Church of the Nazarene until his health declined. He is survived by his daughter, Judith Lutz (Wayne) of Millville, his son, Ronald Keith (Julie) of Princeton, six grandchildren, Matthew Lutz (Kristen), Cynthia Martin (Walt), and Kathleen Lutz, all of Millville. Also, Jeremy Dunham of Charlotte, NC, Kristina Eikrem (Leif) of Princeton, and Josiah Dunham (Kate) of West Chester, PA. He had 7 great-grandchildren, Douglas, Ryan, Cole, Zachariah, Willow and Ruby Martin, and Aiden Eikrem. He is also survived by a brother-in-law, Richard Wettstein. He was predeceased by his parents, his wife of 66 years, Patricia, and his sister-in-law, Judith Wettstein. Services will be held Thursday, December 3, 2020 at 1 p.m., at Millville Church of the Nazarene, 2201 E. Main St., Millville. A viewing will be held prior to the service from 11:30 a.m. to 1 p.m. in the church. Burial will be in Mt. Pleasant Cemetery, Millville. The family’s desire is that friends and family remain safe by wearing masks and practicing social distancing. The services will be shown on Millville Church of the Nazarene Facebook Live at 1pm, for those wishing to view from home. In lieu of flowers, donations can be made to Millville Church of the Nazarene Wings Fund, 2201 E. Main St., Millville. Arrangements are under the direction of Christy Funeral Home, Millville. Memories and expressions of sympathy for Herbert W. Dunham Jr. may be shared on the Obituary Tribute Wall at www.christyfuneralservice.com.

Herbert Wilmer Dunham, Jr. passed gently into the arms of his Savior on Sunday, November 29, 2020. Herb was born in Millville, NJ on March 13, 1932, to Herbert, Sr., and Edna (Mills) Dunham. He was raised in Millville and graduated from Millville... View Obituary & Service Information

The family of Herbert Wilmer Dunham Jr. created this Life Tributes page to make it easy to share your memories.

Herbert Wilmer Dunham, Jr. passed gently into the arms of his...