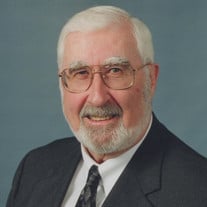 Herbert C. Deininger, age 87 of Millville died at home on December 21, 2019 with his loving wife by his side. Herb was a graduate of West Orange High School, and Perkiomen Preparatory School in Pennsville, PA. He attended and graduated from Lafayette College where he earned an AB degree in Economics. After graduating from Lafayette he served in the U.S. Army in the 319th Military Intelligence Battalion as an Interpreter and Interrogator. Following the military service he was employed by Prudential where, after 33 years of service, he retired as Director of Human Resources and General Manager in 1990. In addition to serving as a volunteer caregiver for South Jersey HospiceCare for 25+ years, he served as Chairman of the Board of Cumberland County Homemaker/Home Health Aide Service, Chairman of HospiceCare of South Jersey and South Jersey Community Health Incorporated. He also served as a member of the Board of Habitat for Humanity of Cumberland County. Until 2010, he was a member and Secretary of the Board of Directors of the South Jersey Health System (now Inspira). While a resident of Vineland from 1959 to 1981, he served on many civic boards and governmental study groups, where he was active in the PTA and chaired the Personnel Management Association of South Jersey. After moving to Millville with his wife Pat, he became a member of the First Presbyterian Church on Maurice River where he served as an elder and sang in the choir. Always a lover of singing, he sang in the Lafayette College Mens Choir, the Millville American Legion Men's Chorus, and was a member of the Holly City Harmony Works, a barbershop quartet. He was a longtime member of the American Legion Nabb-Leslie, Post No. 82 of Millville. Herb was an avid motorcyclist until age 79 when he chose more sedentary pastimes, but still maintained his membership in the Retreads Motorcycle Club. Surviving Herb is his beloved wife and best friend of 35 years Pat; four children, Neil, Allyn, Kit and Leigh; four grandchildren; a niece Alice Hamilton; and a pussy cat named Pest-o. A Memorial Service will begin at 11 a.m. on Saturday, January 11, 2020 at the First Presbyterian on Maurice River, 119 N. Second Street, Millville, NJ 08332. Family and friends will be received on Saturday from 10 a.m. to 11 a.m. in the church. Burial will be private at the convenience of the family. Arrangements are under the direction of Christy Funeral Home, Millville. In lieu of flowers, the family requests memorial contributions to the Inspira Foundation, 2950 College Drive, Suite 1F, Vineland, NJ 08360 or to Bayada Inspira Hospice, 603 N. Broad Street, Suite 301, Woodbury, NJ 08096. Memories and expressions of sympathy for Herbert Deininger may be shared on the Obituary Tribute Wall at www.christyfuneralservice.com.

Herbert C. Deininger, age 87 of Millville died at home on December 21, 2019 with his loving wife by his side. Herb was a graduate of West Orange High School, and Perkiomen Preparatory School in Pennsville, PA. He attended and graduated... View Obituary & Service Information

The family of Herbert C. Deininger created this Life Tributes page to make it easy to share your memories.

Send flowers to the Deininger family.