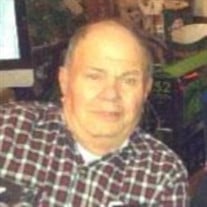 Henry William Peek, Jr. age 81 of Millville, passed away peacefully on Monday, December 28, 2020 after a brief illness, at Inspira Medical Center, Vineland. Born and raised in Millville to the late Henry Sr. and Wilhelmina (Lily) Peek, Henry attended Millville High School, and was a lifelong Millville Resident. Henry proudly served his country in the United States Navy as a Boatswain Mate for four years and then 16 years in the Reserves. He served aboard several ships, including the USS New Jersey during the Beirut Invasion. Henry worked many different jobs as a delivery driver for many years. He also worked as a driver for Friedrich and Dimmock in Millville for several years. He then worked as a custodian at the Cumberland Mall for several years and retired. Henry was a longtime member of the Millville American Legion, Nabb-Leslie Post No. 82. He loved watching all of the old shows on television, Westerns in particular. In his earlier years, he enjoyed fishing around the area, especially in places like Fortescue. He also enjoyed solving crossword puzzles, and spending time with his family and friends. In his later years he always looked forward to taking long overnight truck driving trips with his best friend, Bill. Henry will be sadly missed by his daughter, Cheryle Freeman and husband Jason of Ocala, FL; one sister Rose Marie Peek of Millville; one grandson Kenneth Ajitsingh of Aberdeen Proving Ground, MD; two nephews, Andrew Roman and wife Stacy of Millville and Adam Roman (Cortney); four great-nephews, Thomas Roman, Joshua Roman, Christian Roman, and Greyson Roman; and best friend Bill Cummings of Millville. He was predeceased by his daughter Mary Lou Altonen in 1999; and his good friend Butch Kohansky. Services for Henry will be private at the convenience of the family. Arrangements are under the direction of the Christy Funeral Home, Millville. Memories and expressions of sympathy for Henry William Peek, Jr. may be shared on the Obituary Tribute Wall at: www.christyfuneralservice.com.

The family of Henry W. Peek, Jr. created this Life Tributes page to make it easy to share your memories.

Send flowers to the Peek family.