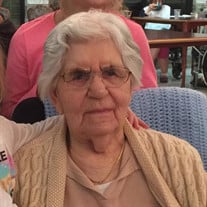 Helen Schujas, 96, formerly from Bridgeton, passed away peacefully Thursday, January 26, 2017 at the Genesis Millville Center, after a brief illness. Helen was born in Greece on December 27, 1920 to the late Nestor and Demetra (Mavraki) Adrianos. She came to the United States in March of 1952 with her 4 year old daughter. She was a homemaker, a loving mother, wife, grandmother, great grandmother and friend. Helen is preceded in death by her daughter, Konstandina Marcantonis; her sons, Christos and John Schujas; her husband, Bill Schujas; her brother Spiros; and her sisters Maria, Evangelia and Katherine. Helen is survived by her daughter Demetra Arvanetes; her daughter in law Penelope Schujas; her grandchildren, Dr. Eleni Marcantonis and her husband Dr. Jerome Norton, Georgia Marcantonis and her husband Jason Cruciani, Eleni Schujas, and Vasilios Schujas; her great grandchildren, Jason Cruciani, Konstantinos Norton, Konstandina Cruciani, Athena Cruciani; and her brother, Sotirios Adrianos and his wife Evangelia. A Mass of Christian Burial will be celebrated at 11 a.m. on Tuesday, January 31, 2017 in St. Anthony's Greek Orthodox Church, 430 W. Wheat Road, Vineland, NJ. There will be a viewing on Tuesday from 10 a.m. to 11 a.m. in the church. Burial will be in Siloam Cemetery, Vineland. In lieu of flowers, donations may be made to St. Anthony's Greek Orthodox Church. Arrangements are under the direction of Christy Funeral Home, Millville. Memories and expressions of sympathy for Helen Schujas may be shared on the Obituary Tribute Wall at www.christyfuneralservice.com.

Helen Schujas, 96, formerly from Bridgeton, passed away peacefully Thursday, January 26, 2017 at the Genesis Millville Center, after a brief illness. Helen was born in Greece on December 27, 1920 to the late Nestor and Demetra (Mavraki)... View Obituary & Service Information

The family of Helen Schujas created this Life Tributes page to make it easy to share your memories.

Send flowers to the Schujas family.