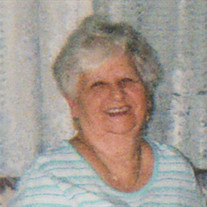 Helen M. (Sykes) Ruppel, age 87 of Millville, passed away Friday, September 29, 2017 at her residence after a brief illness. She was born in Philadelphia, PA to the late Joseph and Helen (Weston) Sykes, and she graduated from Little Flower Catholic High School. For over 25 years, Helen lived in Cumberland County and worked as a Bookkeeper for the Cumberland County Guidance Center in Millville, and retired in 1994. Soon after her retirement, Helen moved to Florida, and lived there for 22 years before returning to Millville in 2016 where she resided with her son and daughter in law. She enjoyed playing BINGO, cards and her piano, and taking cruises. Helen will be sadly missed by her son James Ruppel (Deanna) of Millville; her siblings, Rita Van Buskirk (Jerry), Joseph Sykes (Susan), Madeline Feather, and Peggy Stem (Joe), all of PA, and Kathy Bram (Scott) of FL; her sister in law Patricia Sykes of PA; three grandchildren, Leeann Ruppel (Tom) of Landisville, Stephenee Carsten (Cory) of Millville, and Stacee Davis (Phil) of TN.; seven great grandchildren; and several nieces and nephews. She was predeceased by her husband Jack in 1989; her son John in 2001; her grandson Stephen Carsten in 2014; and two brothers, Jack and George Sykes. Funeral services will be conducted at 12 noon on Wednesday, October 4, 2017 in the Christy Funeral Home, 11 W. Broad Street, Millville. There will be a viewing on Wednesday from 10 a.m. to 12 noon in the funeral home. Burial will be private at the convenience of the family. The family requests memorial contributions to Holy Redeemer Health System, Office of Philanthropy, 521 Moredon Road, Huntingdon Valley, PA 19006. Memories and expressions of sympathy for Helen Ruppel may be shared on the Obituary Tribute Wall at www.christyfuneralservice.com.

Helen M. (Sykes) Ruppel, age 87 of Millville, passed away Friday, September 29, 2017 at her residence after a brief illness. She was born in Philadelphia, PA to the late Joseph and Helen (Weston) Sykes, and she graduated from Little Flower... View Obituary & Service Information

The family of Helen M. Ruppel created this Life Tributes page to make it easy to share your memories.

Send flowers to the Ruppel family.