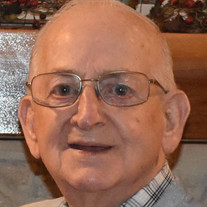 Harry R. Smith, age 85 of Millville, passed away peacefully, surrounded by his loving family, on Monday morning, September 3, 2018, at Inspira Medical Center, Vineland, after a brief illness. Born and raised in Millville to the late Elmer and Dorothy (Maines) Smith, he was a lifelong resident. Harry attended Millville High School and at a young age, he began working as a pinsetter in a bowling alley before working at his uncle Harry Smith's Rug Works in Millville. At the age of 20, Harry then went on to work at Wheaton Glass Company in the Quality Control Department for over 44 years, retiring in 1997. In 1953, Harry married the love of his life, Dorothy, and together they shared over 65 years of marriage. Harry was an avid bowler and enjoyed watching horse racing. He loved sports of all kinds, and especially took great joy in watching the Phillies, Angels, and the Eagles. But most of all, Harry treasured the time that he was able to share with his family. Harry will be sadly missed by his wife Dorothy (Jerrell) Smith of Millville; two daughters, Kathy Riggins and husband Roger of Dorchester and Cindy Fullerton and husband Richard of Dorchester; one son Harry Smith (Maria) of Millville; twin brother Oliver Smith of Millville; two grandchildren, Matthew Riggins and Rachel Fullerton; and several nieces and nephews. He was predeceased by his three brothers, Elmer, Robert, and Paul Smith; and one sister Barbara Christenson. Services for Harry will be private at the convenience of the family. Arrangements are under the direction of the Christy Funeral Home, Millville. Memories and expressions of sympathy for Harry R. Smith may be shared on the Obituary Tribute Wall at: www.christyfuneralservice.com.

Harry R. Smith, age 85 of Millville, passed away peacefully, surrounded by his loving family, on Monday morning, September 3, 2018, at Inspira Medical Center, Vineland, after a brief illness. Born and raised in Millville to the late Elmer... View Obituary & Service Information

The family of Harry R. Smith created this Life Tributes page to make it easy to share your memories.

Send flowers to the Smith family.