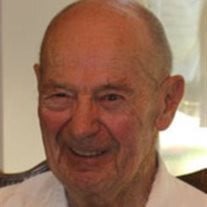 Harry Romanishin, age 89 of Millville, passed away Monday, April 7, 2014 at his home surrounded by his family. He had been in declining health for the past six months. Harry was born September 21, 1924 to Ukrainian immigrants Matthew and Eva Romanishin. He and his twin-brother George were the youngest of ten children. As a teenager, he was involved in Boy Scouting, flying model airplanes, and photography. He graduated Millville High School in 1943, and briefly worked as a truck driver at the Millville Army Air Base. He entered the US Navy in July 1943 and served with the 71st Naval Construction Battalion in WWII, where he earned two battle stars for his participation in the battles of the Admiralty Islands and Okinawa. He was discharged in 1946 and began flying lessons at Millville Airport soon after. He received his flying certificate in March 1947 and attended the University of Colorado, graduating in June 1952 with a BS in Civil Engineering. Harry traveled the world as a civil engineer with major jobs in Newfoundland, Greenland, Thailand, Vietnam, Indonesia, Panama, Brazil, and Liberia. His work mostly involved construction of roads and bridges. He also worked on many jobs in the US including the Garden State Parkway, the Delaware Memorial Bridge, nuclear missile silos in North Dakota, and airport navigational equipment covering a ten-state area in the western US. He worked for PSE&G at the Salem Generating Station before retiring in 1987. He is survived by one son Tom Romanishin and wife Janet of Millville; one daughter Bea Stowe and husband Michael Sr., of Millville; three grandchildren Heather Romanishin, Michael Stowe Jr., and wife Lee Ann, and Brittany Stowe; and two great grandchildren, Ivan and Nikolas Stowe. Harry was predeceased by nine brothers and sisters. Private graveside services will be held at a later date in St. Nicholas Ukrainian Catholic Church Cemetery, Millville . Memorial contributions: Inspira Hospice, PO Box 126, Salem, NJ 08079. Arrangements are under the direction of Christy Funeral Home, Millville. Memories and expressions of sympathy for Harry may be shared on the Obituary Tribute Wall at: Christyfuneralservice.com.

Harry Romanishin, age 89 of Millville, passed away Monday, April 7, 2014 at his home surrounded by his family. He had been in declining health for the past six months. Harry was born September 21, 1924 to Ukrainian immigrants Matthew... View Obituary & Service Information

The family of Harry Romanishin created this Life Tributes page to make it easy to share your memories.

Send flowers to the Romanishin family.